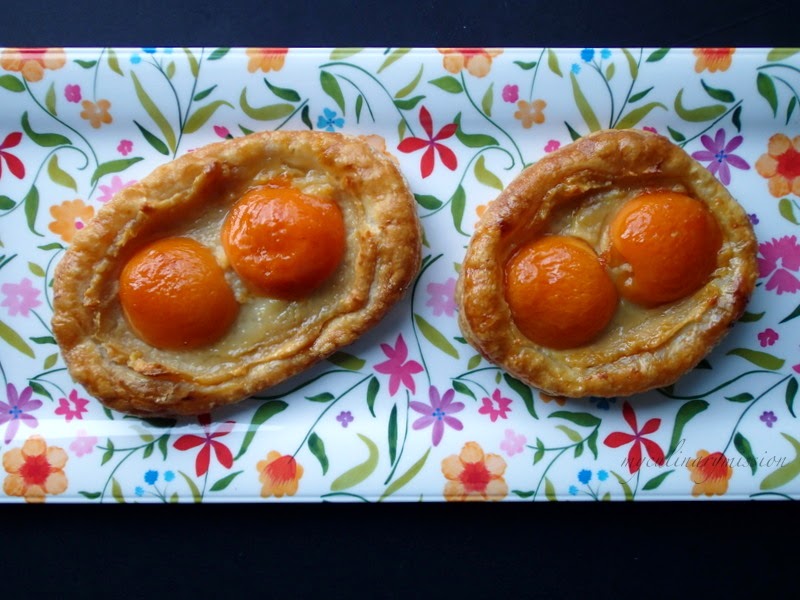 These cute pastries are a breeze to make when you take the short-cuts I did.

I had every intention of making my own puff pastry, but it has just been too warm to attempt - and I wanted to get these made pronto. I'm feeling so behind in my TWD participation. Hence the double post this week.

Not only did I use store-bought puff pastry (Dufour brand - the closest to homemade as one can get. It is made from only butter, flour, water, salt and lemon juice), I also used canned apricots, where the recipe calls for fresh, and to poach them. However apricots are no longer in season in California - just as well, for it saved me an extra step. 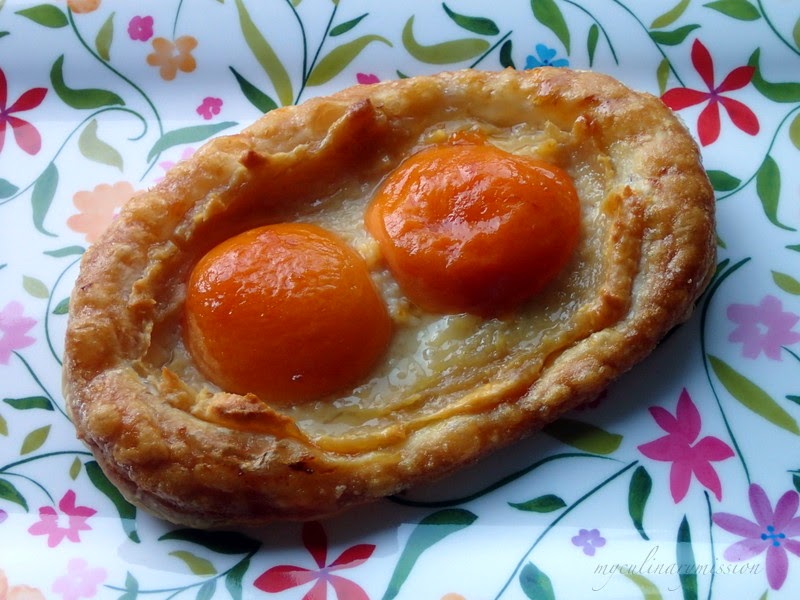 All that was left to make was the pastry cream. This pastry cream was OK. It had an odd after-taste after-feel, kind of powdery. I did add too much vanilla extract, but I don't think that would have given it it's odd texture; the good thing is, it wasn't noticeable after baking. Though next time, I'll use the recipe from Stars Desserts, by Emily Luchetti.

The dough is rolled out on a sugared work surface, then placed sugar side up on a baking sheet, the pastry cream and apricots are placed on top. They are baked for about thirty-five minutes in a three hundred and fifty degree oven until puffed and golden.

An apricot glaze, made from apricot jam and water that has simmered until syrupy, is brushed over the warm pastries. I think it is best to brush them after they have cooled, for the glaze seemed to just soak into the pastry, as well as the apricots. Brushing them again after they cooled gave them a shinier appearance. 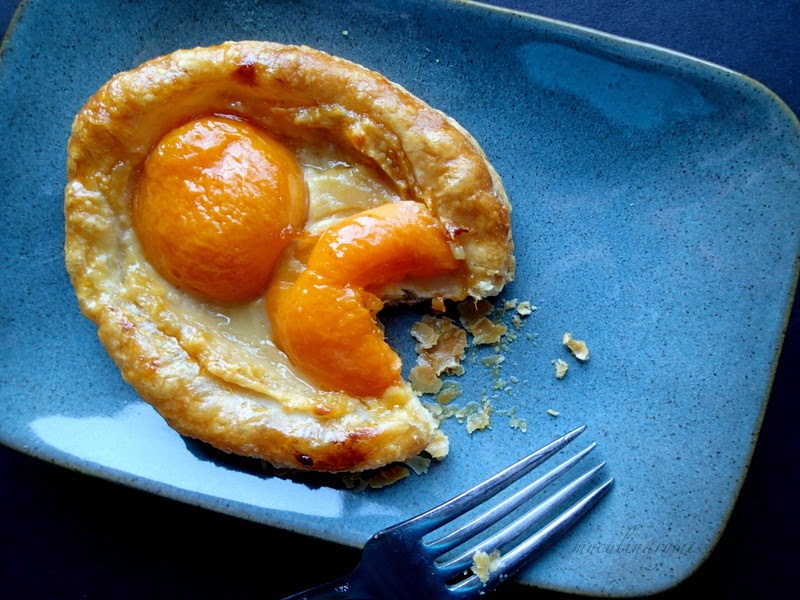 You may have noticed in the first picture, one pastry is smaller than the other. The first pastry I rolled out the dough according to the recipe, and thought it was awfully thin, and was afraid it would not have much of a rise, so I rolled the second one a little thicker and shorter; as you can see they both turned out fine. Though neither puffed as much as in the photo shown in the book.

These were fun to make, and pretty tasty for how easy they were to prepare. I would like to make them again when apricots are in season - I think poached apricots might be a bit firmer, whereas the canned were quite soft.

I don't know what I like best - warm from the oven, or cold, straight from the fridge. I only made two of these and place one in the refrigerator overnight. The pastry still had some crunch to it, and there was a stronger apricot flavor when eaten cold. The pastry reheats nicely too. I placed half of the cold pastry in a three hundred degree oven for about five minutes. 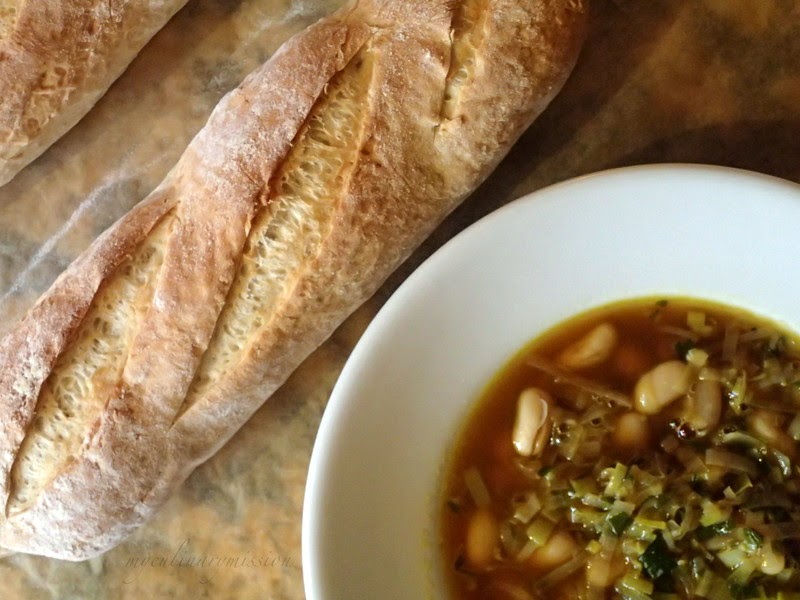 Well. The day I chose to make the French bread, the baking gods were busy, and not with me this day. 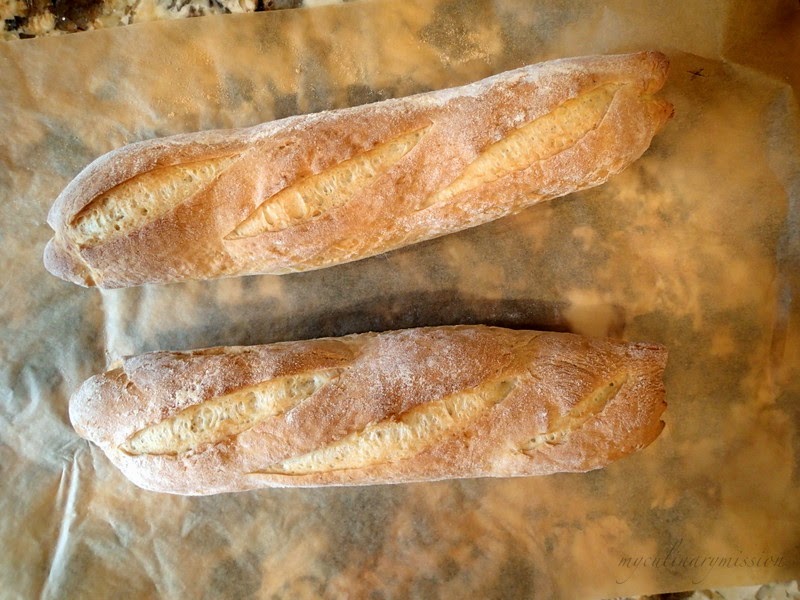 This recipe was scheduled for September. I did not get around to making it then, and we were having soup for dinner, and I thought it would be great to have some bread to go along with.

Reading the recipe, it sounded easy and doable in time for dinner. No matter that it was ninety-four degrees outside, and I would be preheating my oven to five hundred degrees.

I had my doubts from the very beginning. The dough just did not have the soft and supple feel to it as it looked in this video of Danielle making this very recipe. My dough was quite dry and firm. I added extra water, but that did not seem to help any. 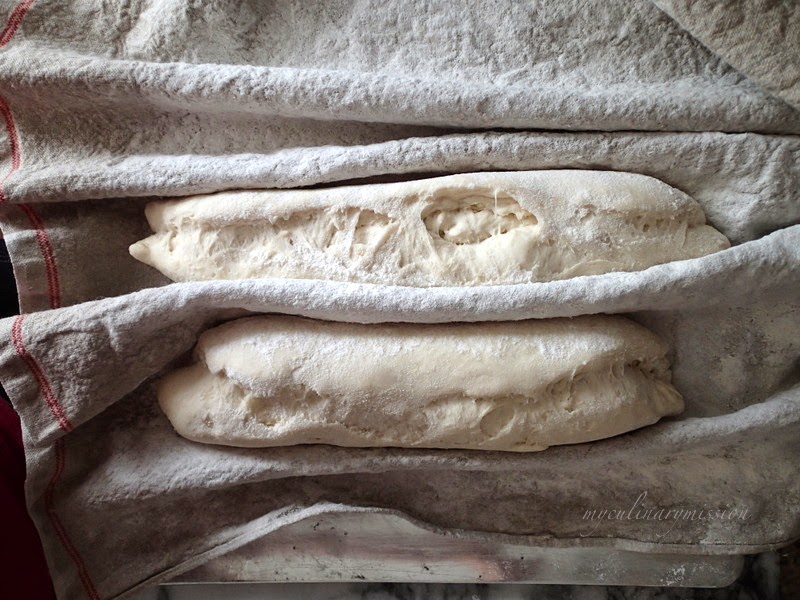 After the dough has been formed into batard shapes (mishap number one: dropped one on the floor), it is placed on a floured linen or cotton towel, and the towel is pleated to help hold their shape. The picture above shows the dough after it has risen. Mishap number two: apparently I did not seal the seams tight enough - they started splitting. At least I knew my yeast was working.

These are then turned out onto a baker's peel, seam side down and slipped onto a baking stone or baking tiles (I used the back of a cookie sheet that was placed in the oven while it pre-heated). Then the oven walls are spritzed with water (alternatively you can pour water in a broiler pan that has been placed on the lowest rack) to create a moist environment. This is what gives the crust its characteristic crunch. 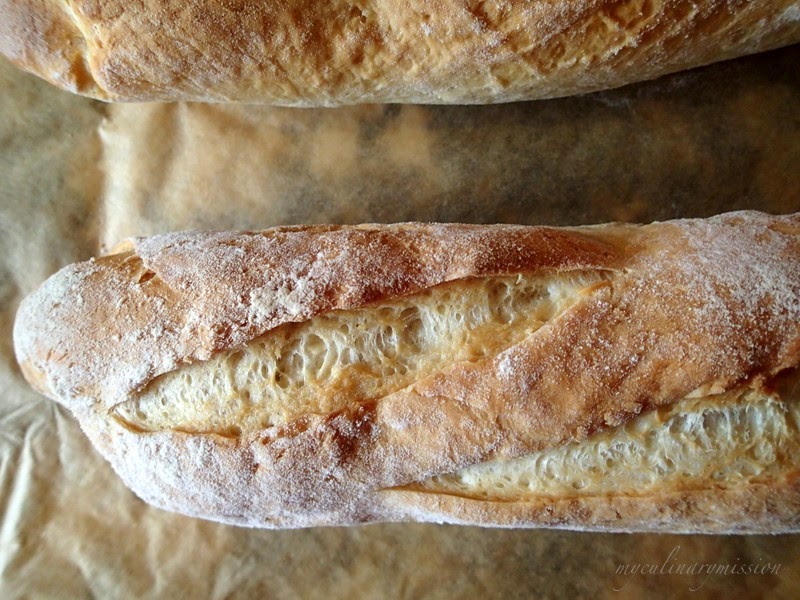 From the look of the slash marks, which I thought turned out so pretty - you can see the bread has an airy look to it. I couldn't wait to slice into it to reveal that airy, holey crumb that French bread has.

Did you know, that in France, it is a law that you have to wait twenty minutes after baking, before the bread can go on sale to the public? Also, no cornmeal is allowed on the baking peel or sheet either (some people use cornmeal for easy transfer and for extra crunch), for French bread is only made from flour, water, yeast and salt - nothing more. 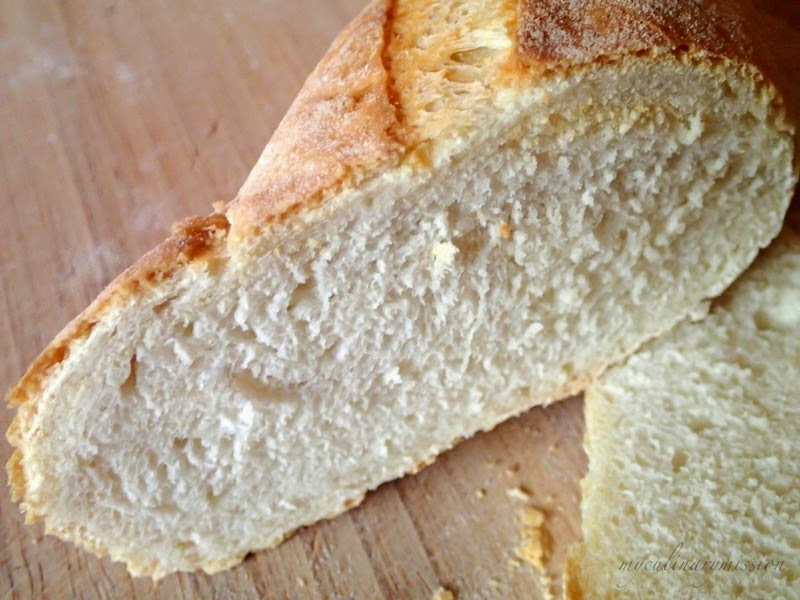 No tunneling holes whatsoever. My crumb is tight as can be. Hmph. Looks like a flat standard white loaf, that also did not have any flavor to it. It did have a great crust though! Oh well. Maybe I'll try again when the weather is cooler.

If you would like to give this a try, click here for the recipe. Do visit my fellow baker's sites to see how they fared with this recipe and the pastry recipe. You will find their links on the LYL: Sunny-Side-Up Apricot Pasties link and the LYL: Classic French Bread link on the Tuesdays with Dorie website.


Posted by Cathleen | My Culinary Mission at 6:41 PM