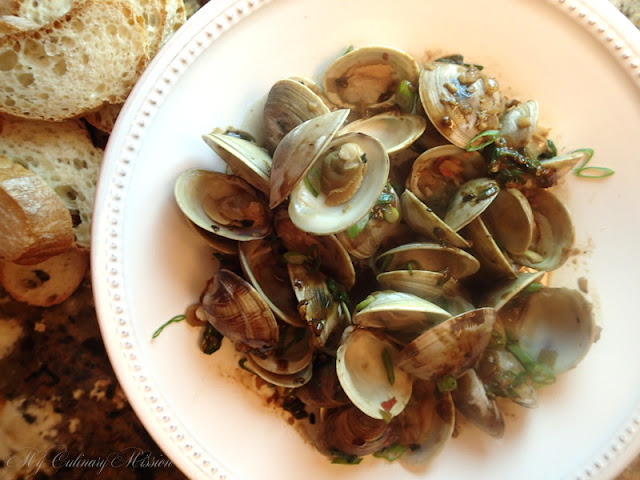 The hubby had no problem polishing these off; this after him saying, clams? with no excitement whatsoever, when I mentioned to him all I had left to do was wash the clams before I started stir-frying (he's not much of a fan of shellfish). To my credit, I did ask him beforehand, like a week before, if he was good with clams for our next WW meal - his answer, if you are making them. 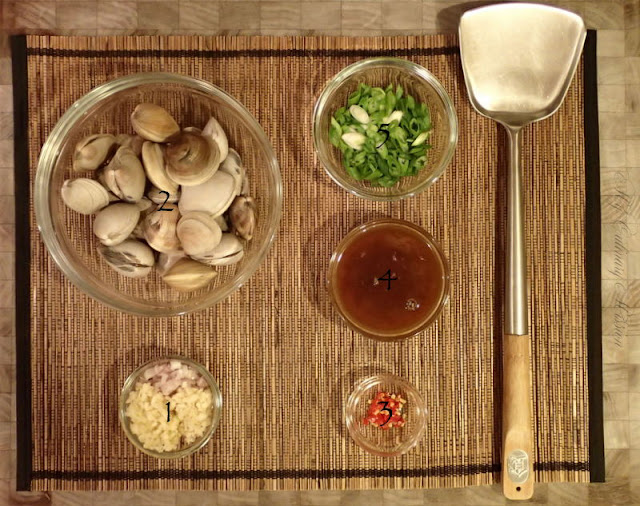 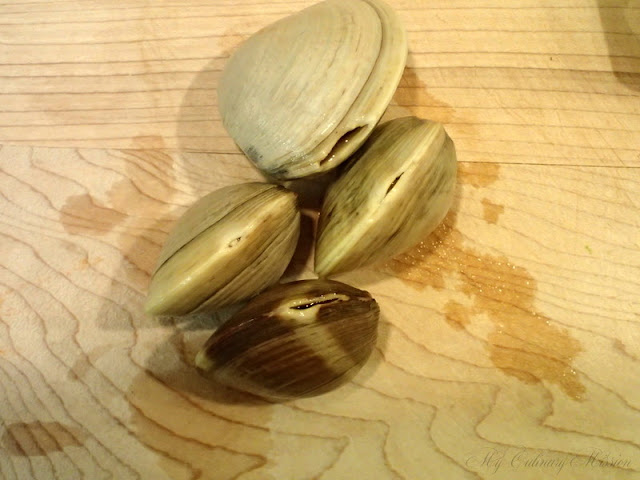 Four of the clams had cracks - so I tossed them; just to be safe. 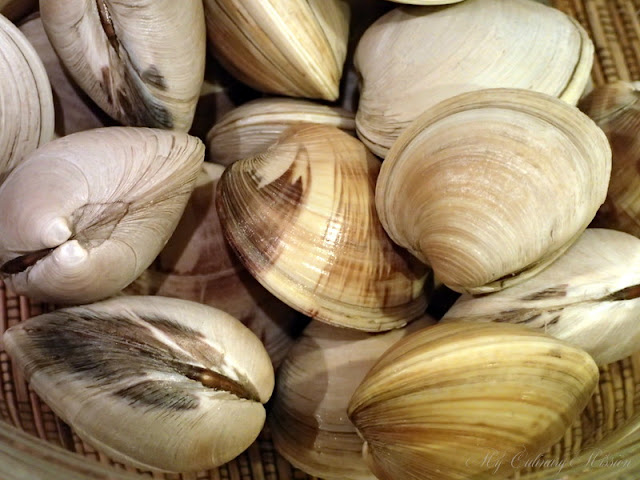 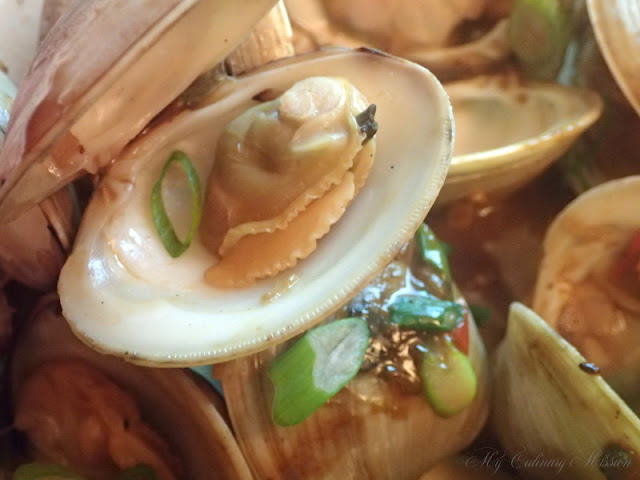 Super easy weeknight meal!! I served this with a spinach salad and French bread. The clams would go nicely served over pasta as well, as a couple of our members did. To see how beautiful the clams look nestled amongst a swirl of linguine, check out Lisette's photo on the WW Facebook page.

This took no time at all to get on the table. This of course depends on your clams. Audrey, another member tells me, if you have access to really fresh clams, like harvesting them yourself, or from a clam fishery, you may need to soak them in cold water for about an hour for them to release their sand. For me, I purchased them at our local higher-end market, which meant they probably had been sitting around, and soaking long enough to expel most of their sand before I purchased them. I had very little residue after rinsing and brushing - and no grit at all while eating them.

If you Google how to prepare clams, some sites say to soak the clams in salted water - probably not the best idea, for clams can be salty on their own, and this recipe calls for bean sauce, which has a fair amount of salt. I felt this stir-fry was a bit too briny, though Andy thought it was fine, and there were no complaints from other members in regards to it being too salty.

A couple of other Wok Wednesday members recommend soaking the clams in water with cornmeal of all things; and Grace even mentions in the book, that old-fashioned Chinese cooks swear by placing a carbon-steel cleaver in the bowl with the clams, this being the best way to clean them.

We have been asked not to post the recipes here on our blog. If you would like the recipe, you will find it on page 169, of  Stir-Frying to the Sky's Edge, which you can purchase at your local bookstore or find it at your local library.

The recipe is also available here; however, I highly recommend purchasing the book - you won't be disappointed.

Posted by Cathleen | My Culinary Mission at 3:05 PM 8 comments 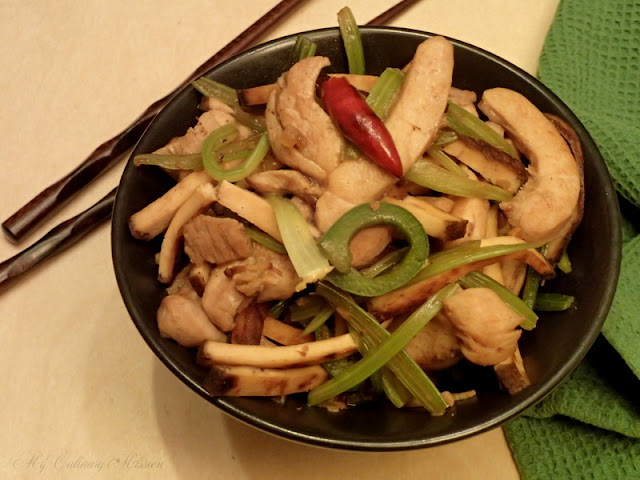 This recipe was picked for the upcoming Chinese New Year. The actual recipe is made with duck, however, I had to substitute chicken for this one.

According to Grace: "Celery is popular to eat for the lunar new year. The belief is that eating celery has positive meaning, because the word for celery in Cantonese, kun choi, is a homonym for diligence." I also read that duck symbolizes fertility - good thing I'm past that stage in my life, being I had to substitute chicken. 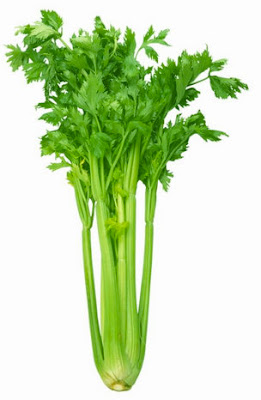 (source)
As you can see, Chinese celery is very similar to American celery. The difference is the stalks are a lot thinner, and the flavor is more pronounced; unlike Western celery, it is vary rarely, if at all, eaten raw, for it is not as tender.  Personally, I enjoyed it raw, more-so than our celery. 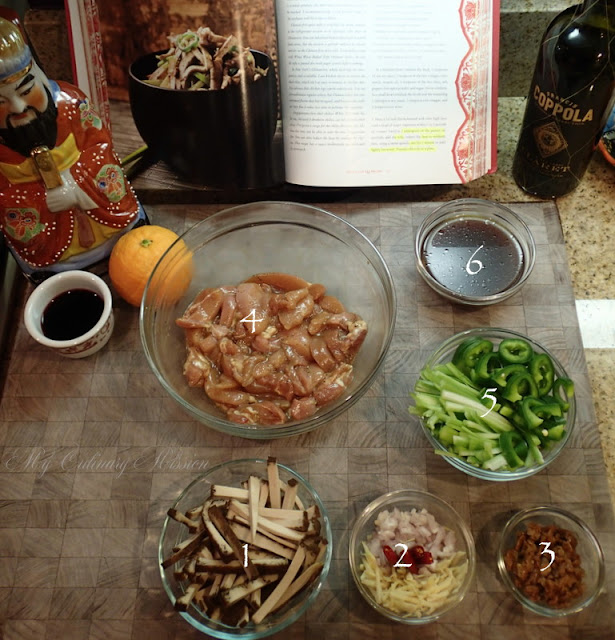 The Kitchen God, with offerings of wine and fruit (blood orange), overseeing my mise en place. 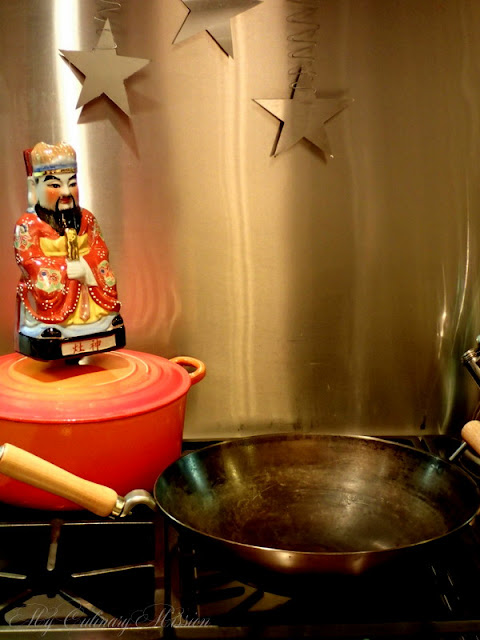 The Kitchen God, overseeing the soon-to-be stir-frying (I hope he is not too tipsy from the wine).

I ended up using chicken in place of the duck, for the duck I had in the freezer was unfortunately freezer-burned, and my meat market only had frozen available. I can only imagine what the "wild" taste of duck would impart on this stir-fry; the chicken made a fine substitute, but missing that "gamey" flavor of duck.

The recipe calls for Anaheim peppers, which I'm sure is what I used (no sign stating what they were), but they did not have any heat to them, so I added four small, dried Thai red peppers with the ends snipped; the amount of heat was spot on.

You can't go wrong when a recipe calls for Chinese five-spice powder - amazing flavor. However, do read the labels! The ingredients vary between brands; my friend Karen, of Karen's Kitchen Stories mentioned hers had six ingredients!! Check out a previous post here for a list of different brands and their ingredients. 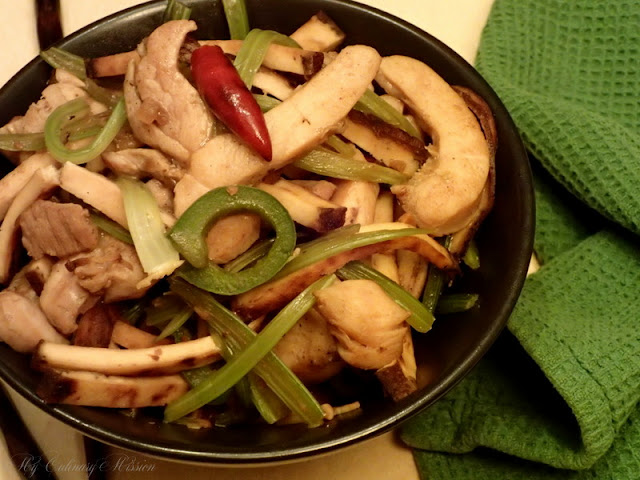 The recipe states this will serve two to three as a main dish with rice. I forgot to make rice, and too bad too, for it had a fair amount of sauce; even without the rice, this stir-fry was quite filling!


We have been asked not to post the recipes here on our blog. If you would like the recipe, you will find it on page 131, of  Stir-Frying to the Sky's Edge, which you can purchase at your local bookstore or find it at your local library. I highly recommend purchasing the book - you won't be disappointed.

Posted by Cathleen | My Culinary Mission at 8:35 PM 3 comments 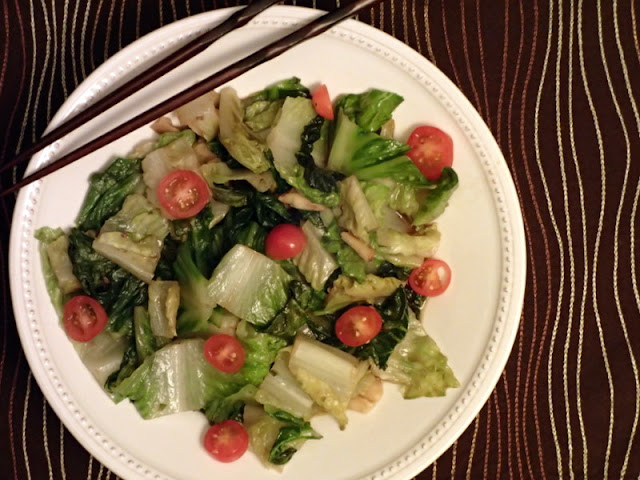 Grace mentions that this is a recipe to be served for Chinese New Year, birthdays, and graduations; for lettuce symbolizes prosperity, and translates to "growing money".  Maybe I'll have good fortune, for I also recently made Grace's recipe Minced Pork in Lettuce Cups - which by the way is so, so good. 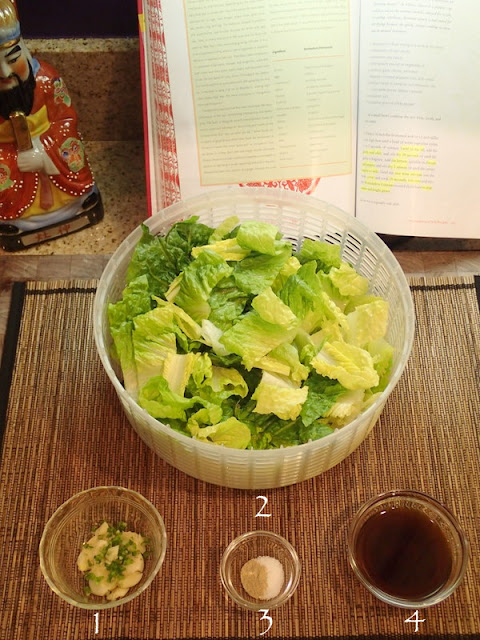 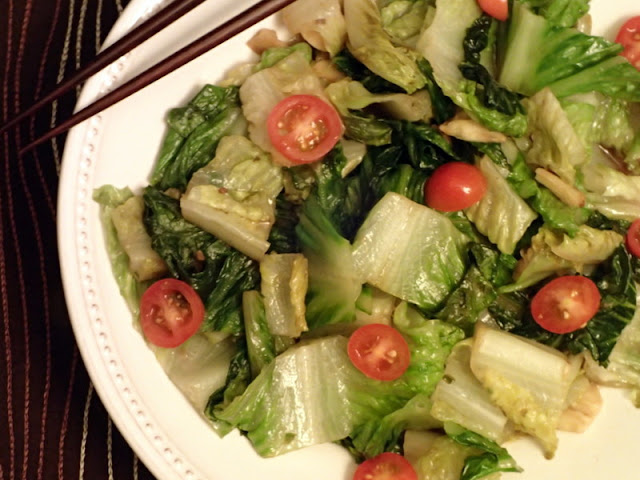 The tomatoes were my addition, for I felt it needed a splash of color. This dish also looks pretty just sprinkled with some sesame seeds, as other members of the group had done.

With just a few simple ingredients, you have a quick and tasty side dish. 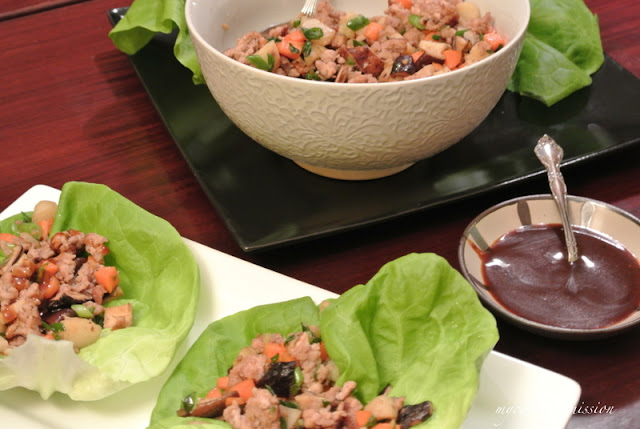 Here are the Minced Pork in Lettuce Cups - you really need to make these...

We have been asked not to post the recipes here on our blog. If you would like the recipe, you will find it on page 195 (p.99 for the lettuce cups), of  Stir-Frying to the Sky's Edge, which you can purchase at your local bookstore or find it at your local library. I highly recommend purchasing the book - you won't be disappointed.

Posted by Cathleen | My Culinary Mission at 4:41 PM 2 comments