by Oxmoor House
Compiled and Edited by Julie Fisher Gunter 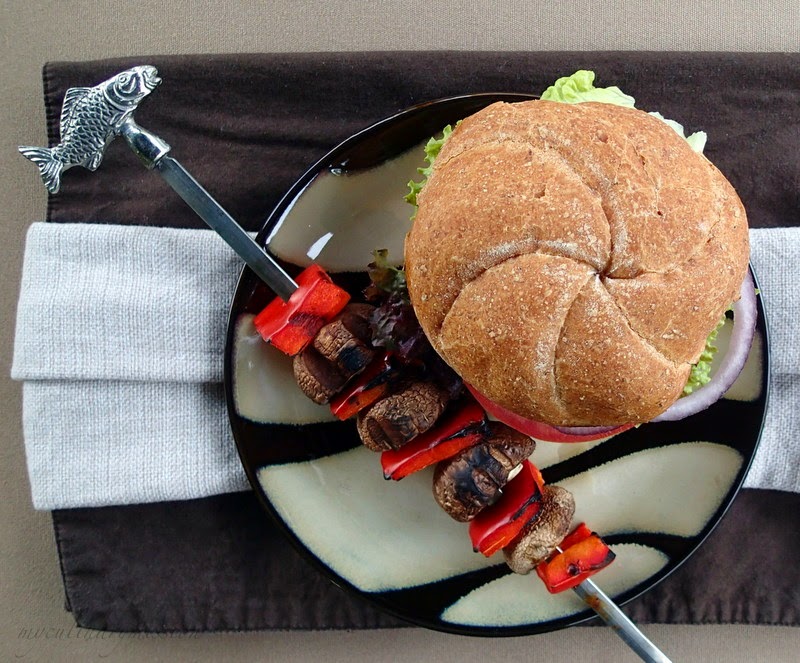 The weather has been nice, and the Mr. loves to barbeque. My original plan was to grill burgers for dinner - then I went and had a ball-tip sandwich (they are sooo good) from Kinders for lunch; there went my dinner plans.

To the bookshelf I went - pulled this book out and looked up barbeque in the index. This recipe caught my eye. I hate to admit it, but I used to (many, many years ago) love the fish sandwiches from the local fast-food joint (I think it was Burger King). I know, I know... I did say used to. :) 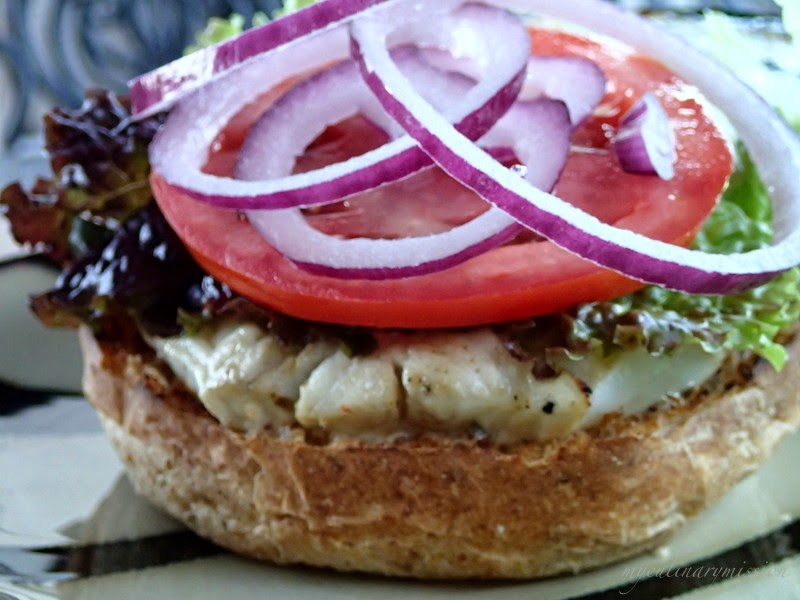 Before grilling, the fish is marinated for an hour, in a mixture made up of scallions, garlic, olive oil, white wine, lemon juice, salt and pepper. 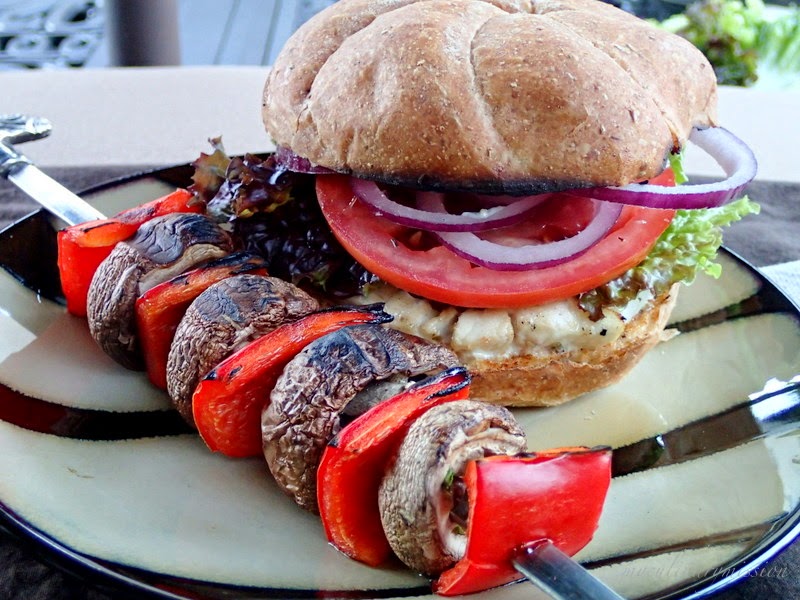 The fish is then grilled for about fifteen minutes (depending on the thickness of your fish) and placed on a toasted kaiser roll (I used wheat kaiser rolls), that is spread with tarter sauce, then topped with red onion, lettuce, and tomato. 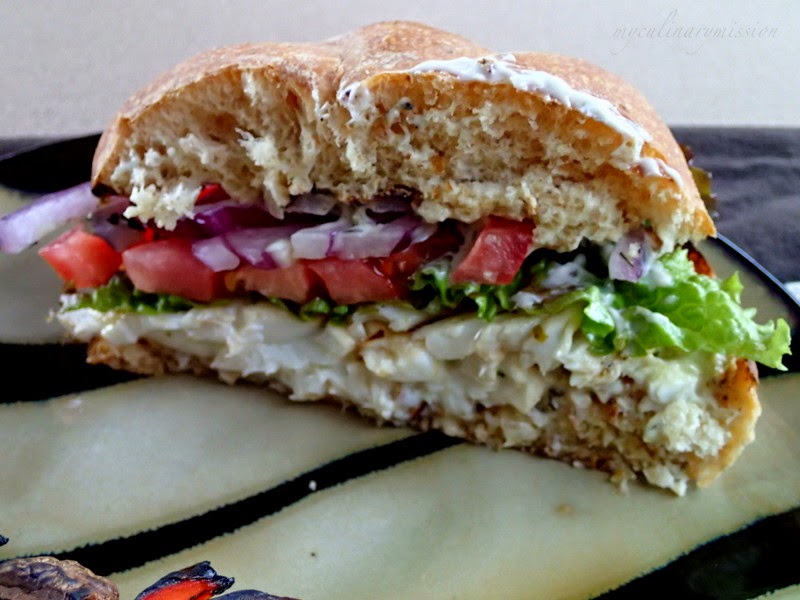 I'm sure I don't need to say it... but I'm going to anyway... these are way better than the fast-food restaurant sandwiches I used to eat. The Mr., he thought they were good, but wasn't gaga over them.  I'm sure he would have preferred the beef burgers I original planned for dinner instead.

Barbeque weather has just began.. plenty of time for burgers. :) 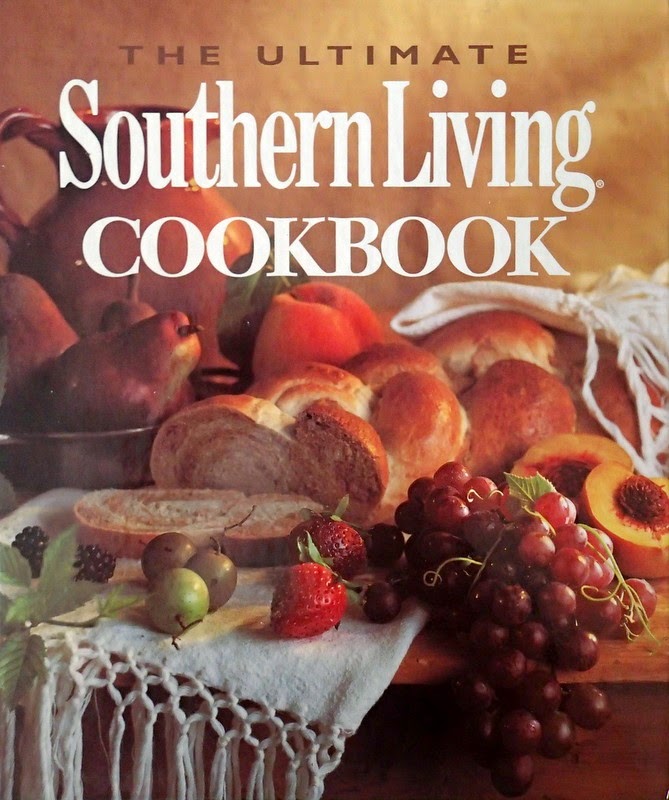 Continue for recipe...
Posted by Cathleen | My Culinary Mission at 7:43 AM 5 comments 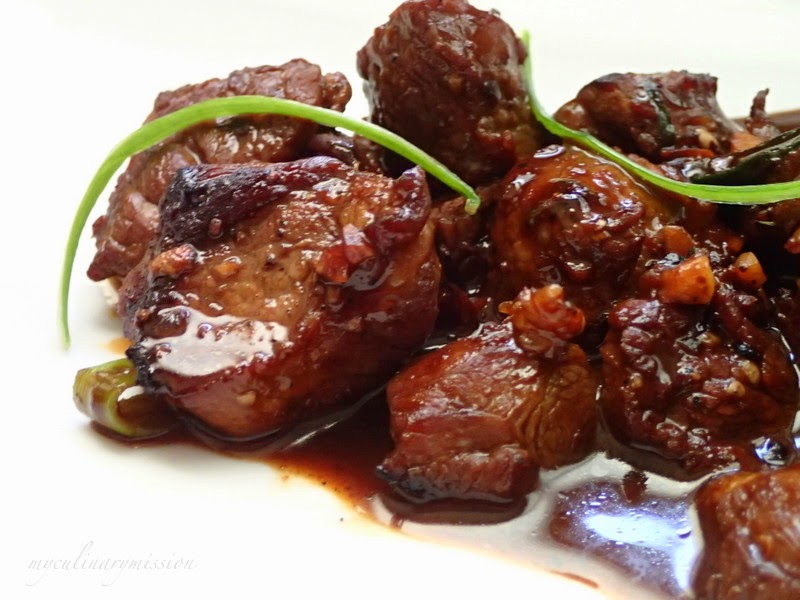 Today's recipe was quick and easy to prepare; a quick shredding of the scallions (especially if you have this fancy, yet inexpensive tool), mincing a few cloves of garlic, and cutting of the lamb. Throw the lamb into a bowl with a few other ingredients, make a quick sauce, and bam! ready to stir-fry. The stir-frying itself only takes a whopping two to three minutes, and you have dinner on the table pronto. 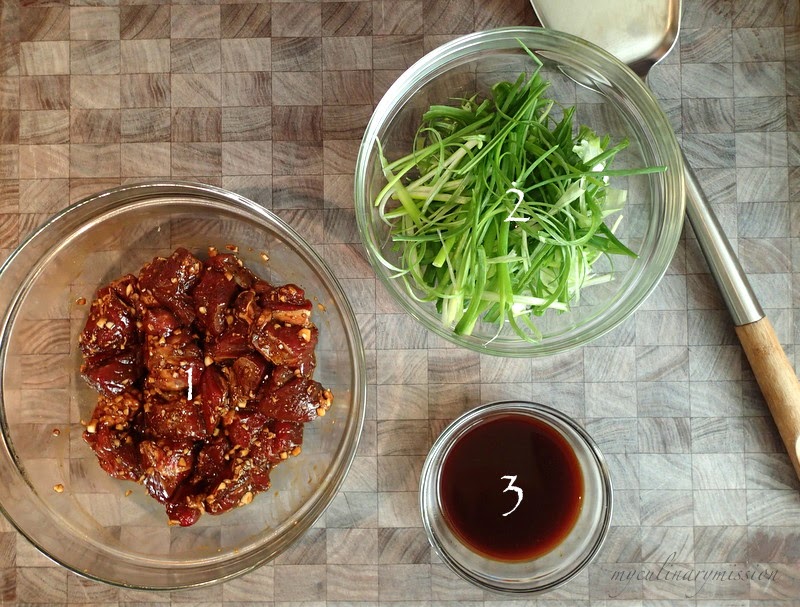 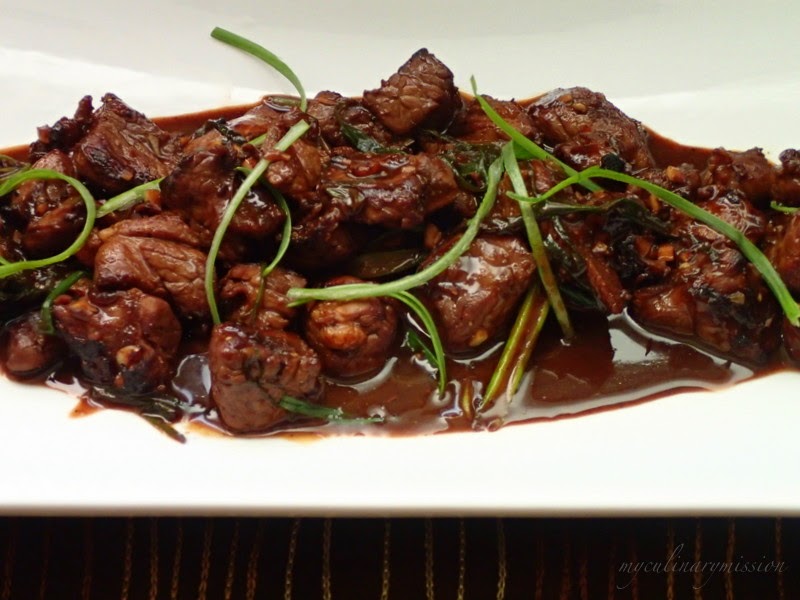 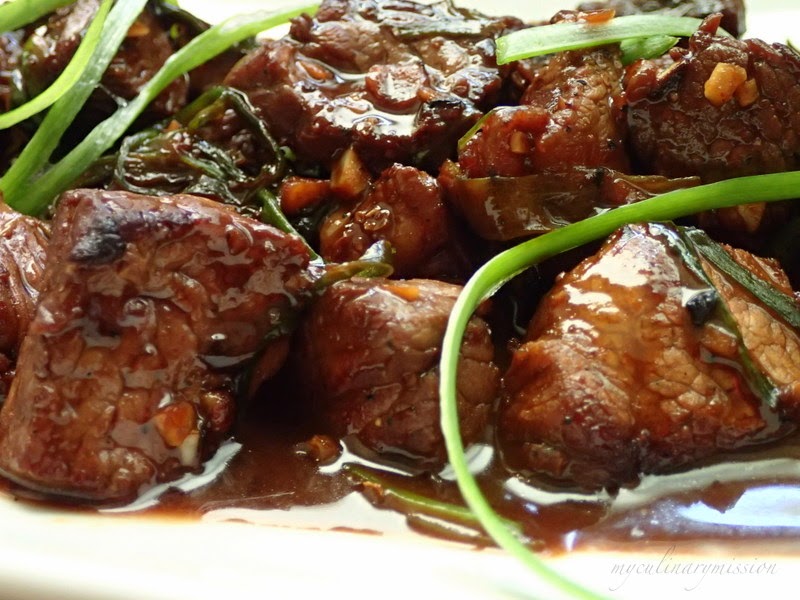 There have been very few recipes that have not wowed me from this book. This is one of them - and that is because I am just not fond of lamb in general. I could see making this with flank steak, or chicken even, and enjoying it much more - as I mentioned above, the sauce was tasty. If you are a fan of lamb, by all means give this recipe a try; even if you are not, sub the lamb for something else.

We are asked not to post the recipes here on our blog. If you would like the recipe, you will find it on page 90 of  Stir-Frying to the Sky's Edge, which you can purchase at your local bookstore or find it at your local library. I highly recommend purchasing the book - you won't be disappointed.

Posted by Cathleen | My Culinary Mission at 8:00 AM 4 comments Cantuccini, cantucci, biscotti - whatever you want to call them, they are basically the same; a twice baked (almost rock-hard) cookie/biscuit. These are meant to be dipped in vin santo, coffee, or tea. I'm sure milk or hot chocolate would be just as good to dip into as well. At the risk of possibly cracking a tooth, you will want to dip... 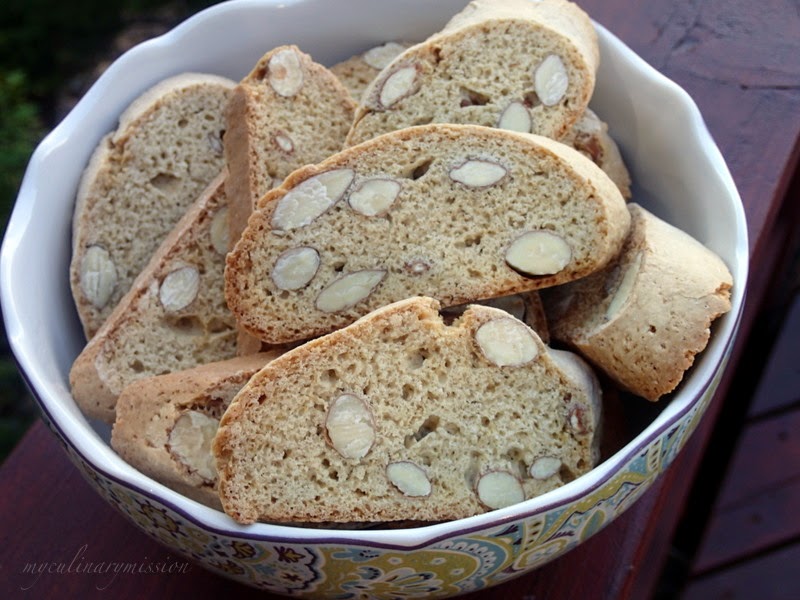 This was one easy peasy recipe! And to think I almost passed on this one. No long chilling times or rest periods, or fancy equipment needed - just a bowl or two, a cookie sheet, and a serrated knife; and clean-up was almost non-existent! 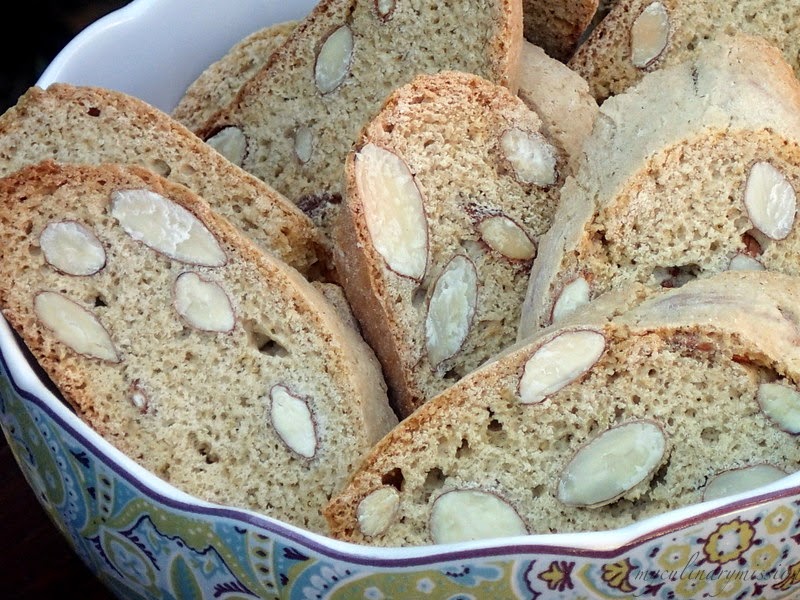 My original plan was to halve the recipe. I did not want to have a hundred cookies (the recipe makes eight dozen!) laying around that I may be disappointed with; we made hazelnut biscotti in July 2012, and I was not all that impressed with them.

I ended up making only a third of the recipe, which yielded 18 cookies (I cut mine closer to a 1/2-inch thick, rather than the 1/4-inch thick as instructed); for when I went to the refrigerator to grab the eggs, I discovered I had only one egg. How could that be?

I guess it was meant to be - who needs that many cookies in the house, when you end up liking them.

Do make sure to visit the blogs of my fellow bakers to see their results with this recipe. I'm sure there will be a few different variations, as there usually is. You can click here to be directed to the list of their links on the TWD LYL: Cantuccini post.

Should you like to try your hand at making these, you will find the recipe on page 313 of Baking with Julia, or on Nick Malgieri's (the contributor of this recipe) website. (I did notice that the recipe on Nick's website uses a half teaspoon less of baking powder, than is called for in the book.)

Posted by Cathleen | My Culinary Mission at 12:00 AM 13 comments This week's recipe, potato lefse (pronounced lef-suh) is a Norwegian flatbread made with potatoes, butter, heavy cream, sugar, salt, and flour. You may think they look like a tortilla, but that is where the similarities end - these are softer and sweeter, and when made correctly, thinner. (I started out using a French rolling  pin which left the edges thicker than the center. A traditional rolling pin works much better.)


These where extremely easy and fun to make. They do take a little advance planning, for the dough needs to chill overnight (at least eight hours) in the fridge - other than that, these were made in no time at all. 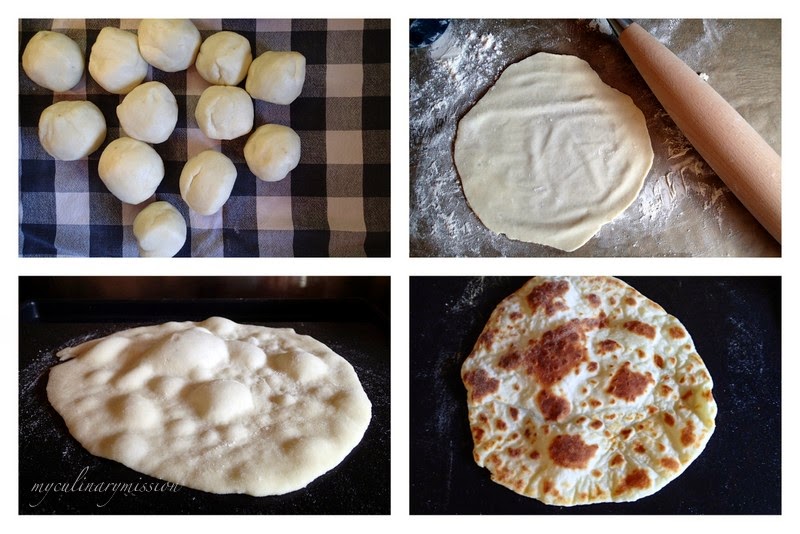 After the overnight rest in the fridge, flour is added to the rest of the ingredients to form a nice soft dough, which is then divided into twelve pieces and formed into balls. The dough balls are rolled out till they are tissue paper thin - you want to be able to see through it. Then they are cooked on a griddle until bubbly and browned.

Don't shy away from making these because you don't have the special equipment traditional lefse is made with -  a ricer, grooved or cloth-covered rolling pin, round griddle, and a lefse stick. I have none of these items (and no dear, please don't go out and buy them - thank you anyway), nor did my fellow bakers, and we all made these successfully. 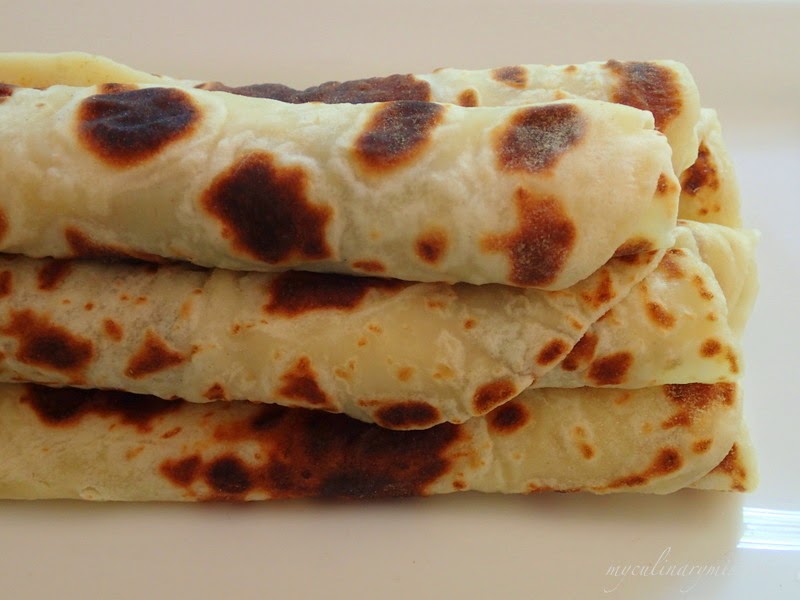 Here is what I used to make my lefse:

A food mill in place of the ricer - if you don't have either, maybe try pushing the potatoes through a strainer - the object is not to have any lumps in your potatoes.

A traditional rolling pin - keeping it well floured ( as well as your work surface. Be forewarned - flour will get everywhere!)

A griddle that fits over the gas burners on my cooktop. An electric griddle or nonstick fry pan would work too.

As for the lefse stick, I was able to lift the dough off the work surface with my hands and place it on the griddle, and used my trusty fish spatula to turn it over. An offset spatula, dowel, or new paint stirrer can be used as well. 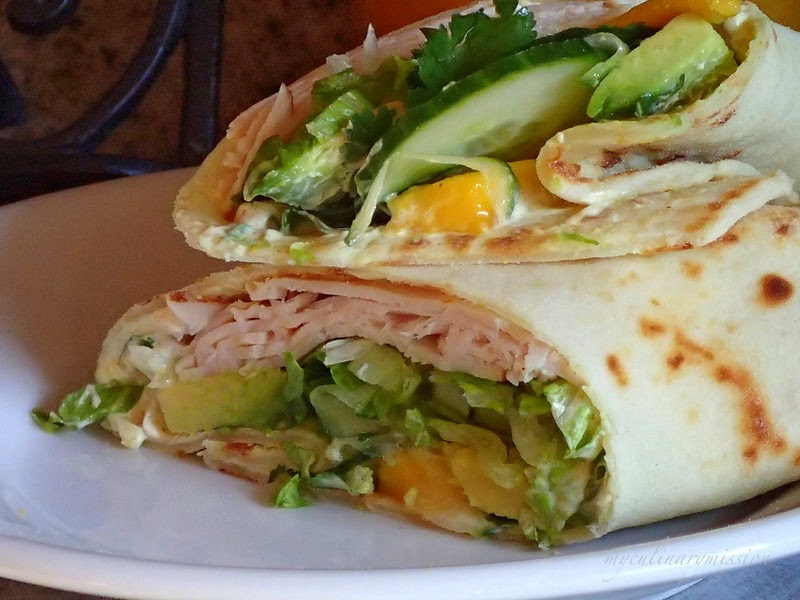 Traditionally, lefse is served warm, spread with butter and sprinkled with sugar or cinnamon sugar and rolled up.

I chose to use the lefses for one of our favorite dinners - smoked turkey wraps with mango and curried mayonnaise. The hubs said the wraps were even better, and want them to always be made with lefse. Not sure that will happen... being I very rarely know what I am making for dinner, just hours beforehand.

The next day I tried the lefse with some butter and cinnamon sugar as suggested in the book -  s o   g o o d!

These are definitely worth a repeat performance..

To see all the fabulous results with this recipe, without any special equipment, check out the links of my fellow bakers. Their links are listed under the LYL: Potato Lefse link, on the TWD website.

If you would like to see lefse being made, here is a video one of our bakers posted, of Beatrice and Martha Stewart making the these. It's always nice to have a visual.

Continue for recipe...
Posted by Cathleen | My Culinary Mission at 6:04 PM 10 comments 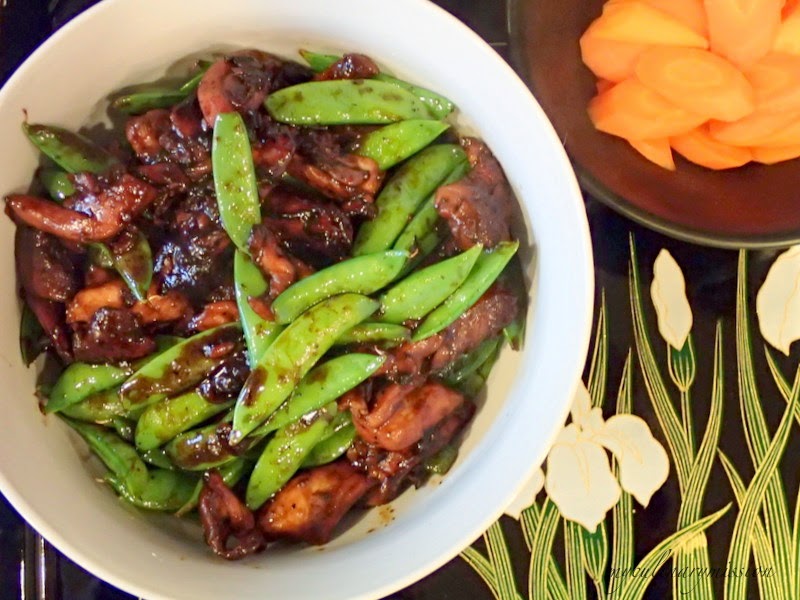 Stir-frying in general, makes for quick meals; and this recipe is one of the quicker ones - due to just a few ingredients. OK, it seemed like a few, there are thirteen actually - however, all but two, are condiments and spices. There was very little preparation involved - just the slicing of the chicken, rinsing of the sugar snaps (if like me, you do), and mixing the spices and condiments together. So easy, so quick, so delicious. 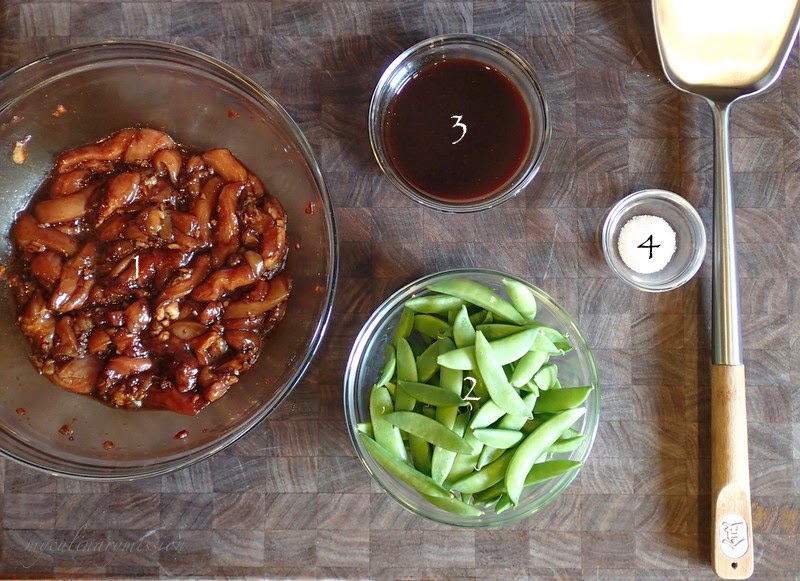 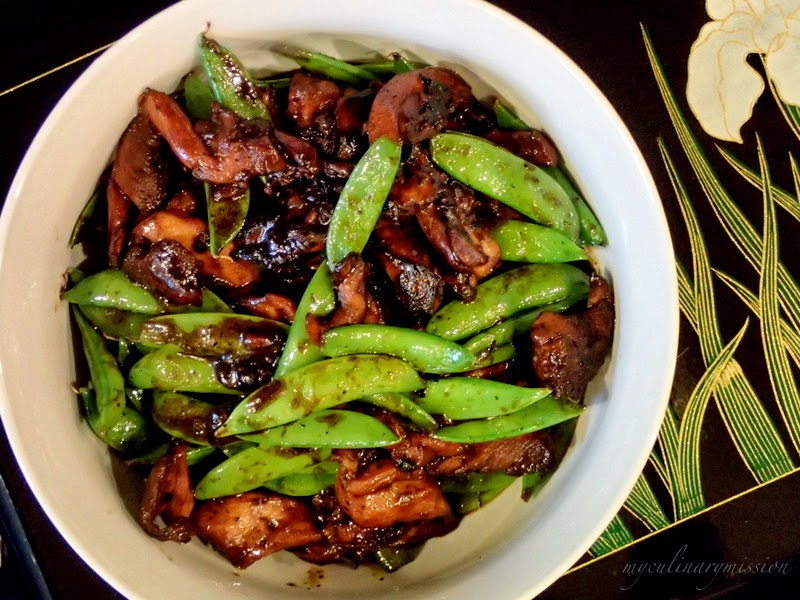 This would have gone even quicker, if I had only checked my spice drawer for the Chinese five-spice before going to the store. I swear I had a jar - and was so thrilled to be able to use it again. Must have been old and I tossed it when I cleaned the drawer out last.

I texted the hubby to pick up a jar on his way home. Of course he had to go to two stores before he found it. He brought home a brand I haven't used. Grace mentions in the book, that this spice blend consists of Sichuan peppercorns, star anise, fennel, cinnamon and cloves. I checked the label's ingredient list and there is no Sichuan peppercorns listed - Spice Hunter brand substituted black pepper.

This lead me on an internet search for the authentic Chinese five-spice blend (see the end of this post for my findings). Out of the six brands I searched, only one had Sichuan peppercorns - of course it would not be the one available at your neighborhood grocery. The ingredient list differs by brand as well. 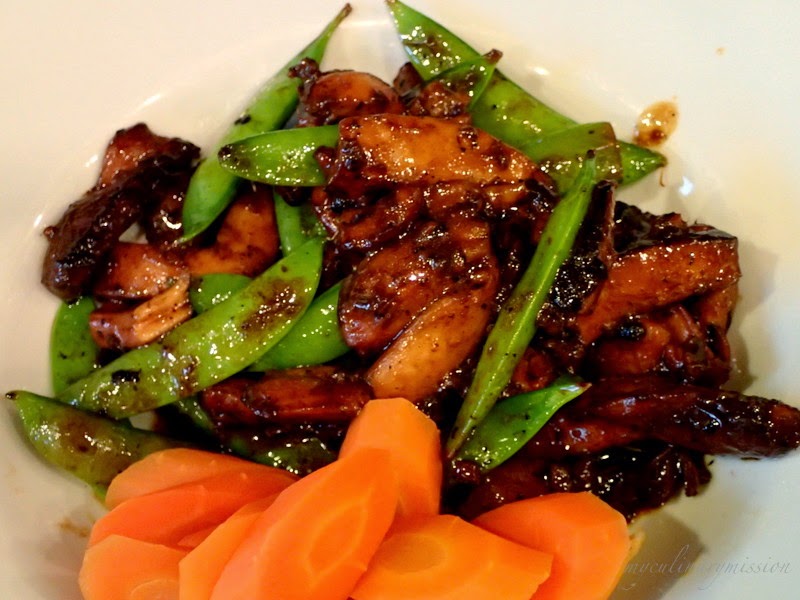 The chicken gets marinated in a mixture of dark soy sauce, honey, cornstarch, dry sherry, five-spice powder and sesame oil. It's amazing how tender and moist the chicken becomes after just a short time in the marinade - it marinates just long enough to gather the rest of the ingredients and set up shop.

Ohhh, why did I not make rice this time; or at least have some bread on hand. There was plenty of the most delicious sauce, with an exotic, somewhat sweet, and savory flavor, just begging to be soak up and consumed. I had to make do with swirling my steamed carrots into the sauce, which they did a pretty good job of it, and tasted pretty darn good too!

Grace, thank you for another wonderful recipe.

And now for my Chinese five-spice findings (Sichuan peppercorns substitute is shown in italics):

So there you go! It definitely pays to read labels..

Wok on my friends!!

We are asked not to post the recipes here on our blog. If you would like the recipe, you will find it on page 120 of  Stir-Frying to the Sky's Edge, which you can purchase at your local bookstore or find it at your local library. I highly recommend purchasing the book - you won't be disappointed.

Posted by Cathleen | My Culinary Mission at 12:00 AM 6 comments