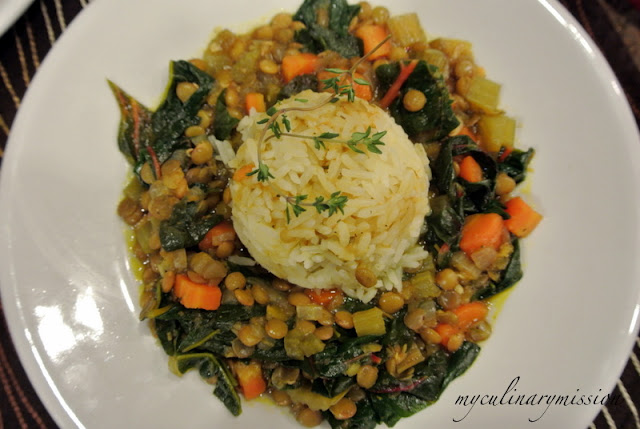 
I have made a few recipes from this book, and one recipe in particular I have made multiple times - and I was going to make it again for this post!

I had a few extra minutes so I sat and browsed through this book again; as I was flipping through the pages this recipe caught my eye and I thought it sounded tasty, and it would be something new. Boy am I glad I went with this one. It's good - and good for you!

I went to my local market and the Swiss chard looked pitiful - so off I went to Whole Foods (aka whole paycheck - my grandmother always said, "you get what you pay for" - that is always in the back of my mind and oh so true in this instance.) Not only did the chard look absolutely wonderful, but they also had the rainbow chard, which I always think is so beautiful - so that's what I went with.

I had a hard time resisting the urge to add more broth at the end - this is supposed to be a stew, not a soup. Still, next time, I may add just a little more...

The stew had such wonderful flavor. I'm wondering if it was the freshly dried bay leaf I used; I'll have to make this again with a regular store-bought bay leaf to see if there is much of a difference.

Take my word for it - this is good. 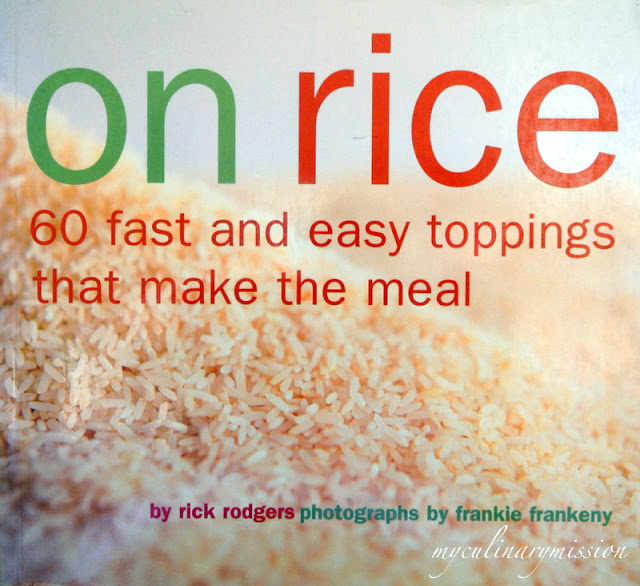 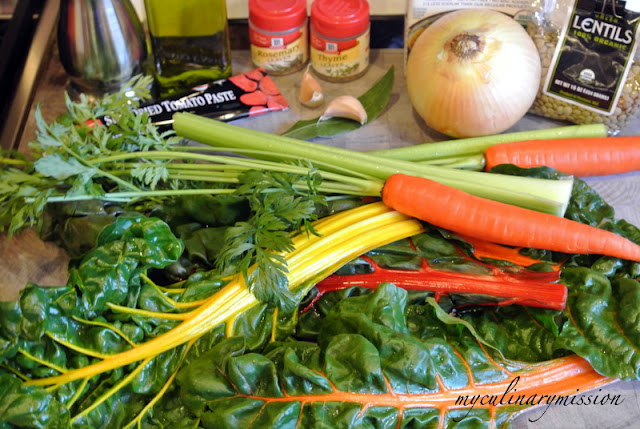 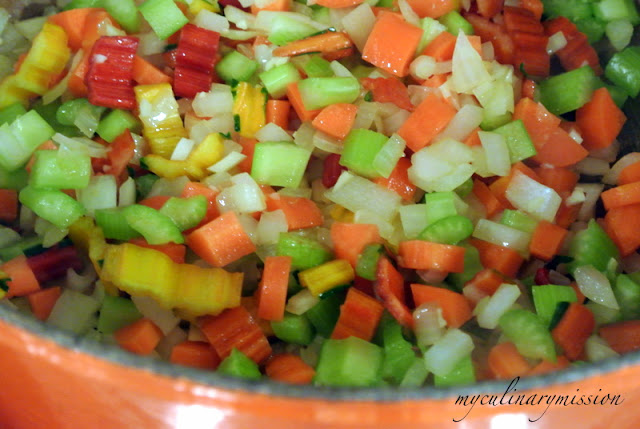 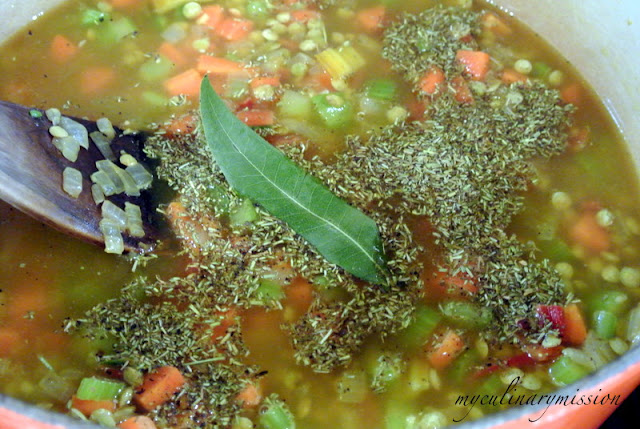 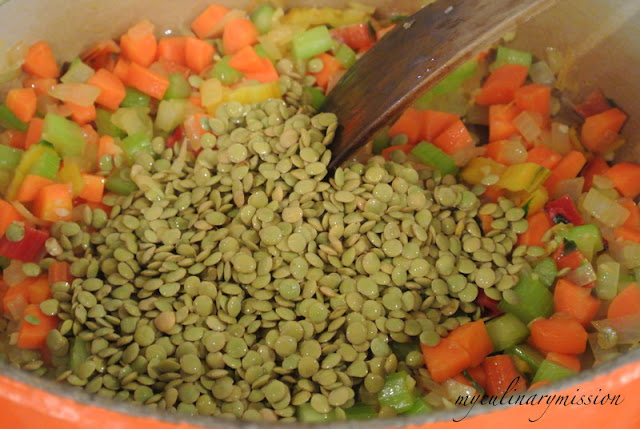 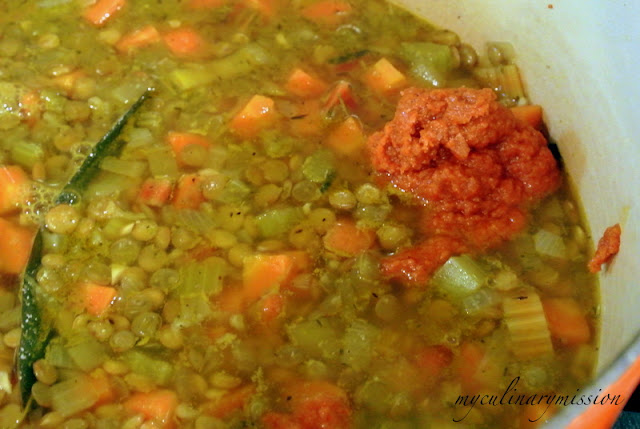 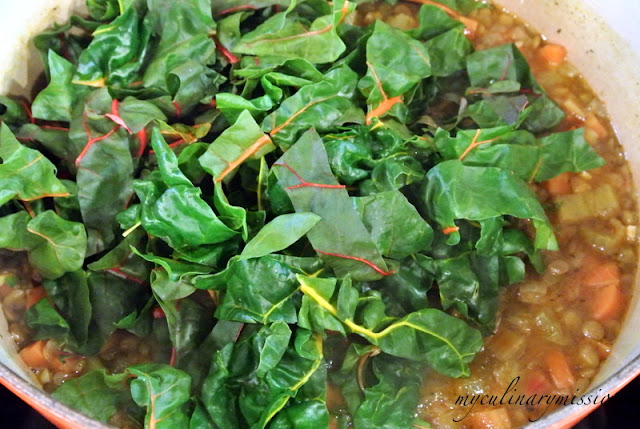 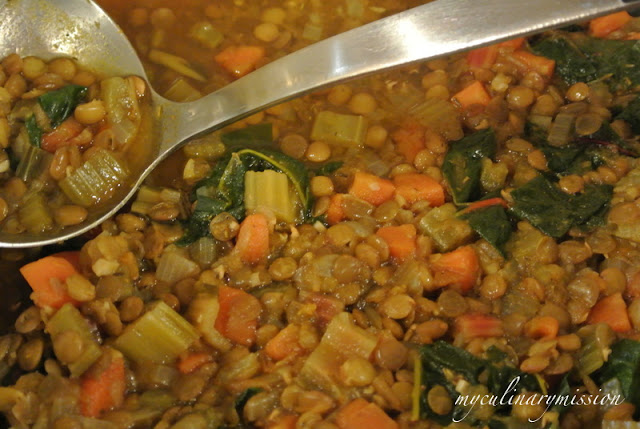 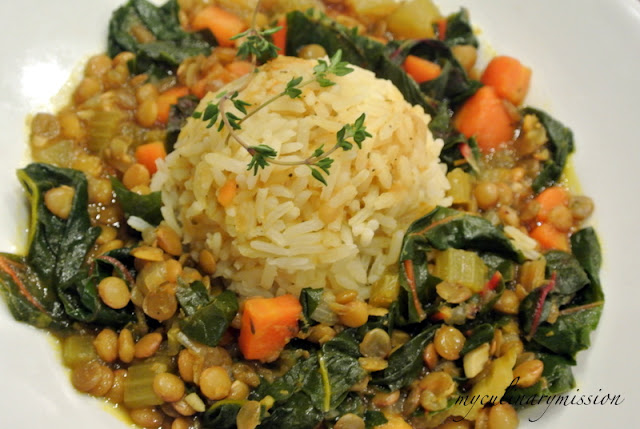 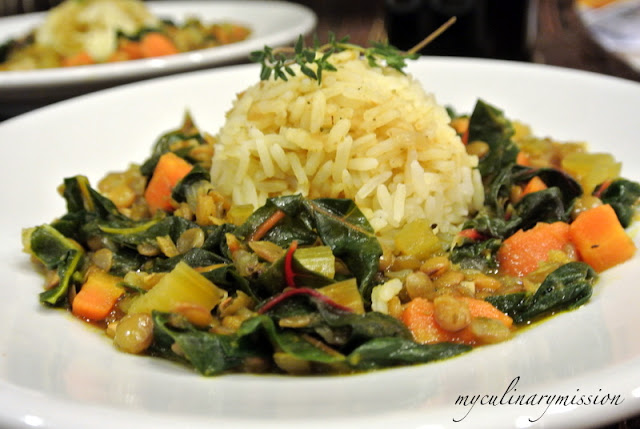 Continue for recipe...
Posted by Cathleen | My Culinary Mission at 9:31 PM 1 comments 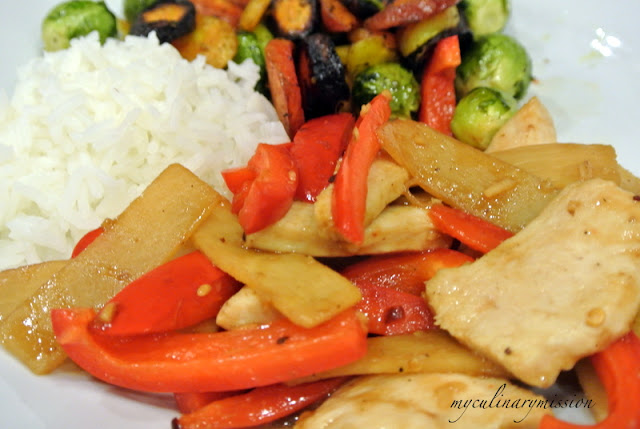 The one thing I like about the recipes in this book and stir-frying in general, is being able to get a meal on the table in no time. So when it is time to whip up a WW recipe I wait till the last minute before prepping.

Oops - not so with this one!

Don't get me wrong - this is still an easy recipe to throw together, it just has a couple of extra steps that I was not expecting. Yes, I did read the recipe - the other day. I just forgot the extra steps of chilling the prepped chicken (meat mixed with cornstarch, egg white, rice wine, salt and water) for thirty minutes and the need to "blanch" the chicken in boiling oiled-water beforehand; a technique called velveting.

Normally when a recipe calls for chicken breast, I sub chicken thighs for they are generally more moist. The last two dinners I made calling for breast meat, I used breast meat, and was sorry; the chicken turned out extremely dry. However, my positive experience with Grace's recipes made me stick with using breast meat once again.

The chicken turned out amazingly tender and silky smooth; well worth the extra step and time.

Hoisin sauce is described as salty, sweet and spicy. However, the brands that I have used have not come across all that spicy to me, so I was confused by the title Hoisin Explosion Chicken. Explosion to me translates to POW! a hit of spiciness so hot you run for a big glass of water hoping to squelch the heat.

While prepping my ingredients (mise en place), the recipe called for one-half teaspoon of red pepper flakes - this is where the POW! comes from.

Another successful recipe - you can't go wrong with this book. 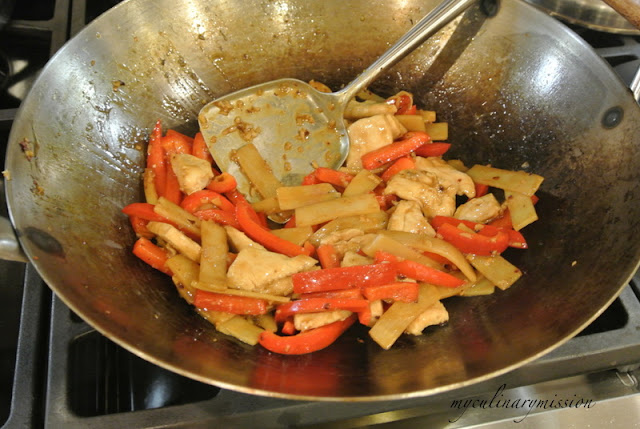 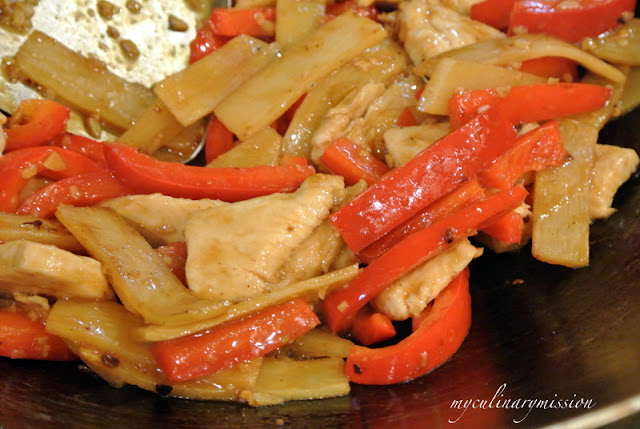 You will not find the recipe here on my blog or within the Wok Wednesdays community. We encourage our readers to purchase this book at their local independent bookstore or on-line to support the publishing industry and to help keep books alive! I know I prefer to flip through the pages of a book rather than read them electronically; nothing compares to the feel and smell of a printed book.

Make sure to visit my co-wokkers to see their results on this stir-fry.
Look for the LYL link on the Wok Wednesdays page.

Posted by Cathleen | My Culinary Mission at 12:00 AM 3 comments

This is a stunning dessert that is easier than it looks to achieve - you just need to allocate a full day to make it or you can get a head start by making the tart dough up to five days ahead, and I don't see any reason why you could not make the filling the day before - cover and refrigerate it. I would bring the filling to room temperature before placing it in the crust.

The filling is a simple compote (aka applesauce) made of apples, sugar, cinnamon, lemon juice, and to thicken the compote, a bit of flour and breadcrumbs. Yes, you read that right - breadcrumbs. I never before have used breadcrumbs as a thickening agent. We learn something new everyday.

I was going to skip the addition of the crumbs, for the recipe calls for "fresh fluffy bread crumbs" which I interpret to be made from white bread, and all I have is whole-grain seeded bread and was not about to buy a whole loaf of white for one slice.  I then heard that the crumbs help soak up the juice of the baked apples and decided to go ahead with using my whole-grain bread (don't want a soupy tart now) after reading another baker from our group used her homemade half-white/half-wheat bread and it turned out fine, as did mine.

Should I make this again I would brush the finished tart with some apricot glaze to give it a little shine. The apple design has a dehydrated, unrefined look to it which I think is why I keep calling it a rustic apple tart instead of French apple tart.

Leslie (the contributing baker) states, "This tart is at its prime ever so slightly warm or at room temperature."  I find this true with just about any baked good. I enjoyed my slice at room temperature and it was good. I was going to send the rest into work but forgot to tell the hubby to take it, and then I forgot to take it in with me. Darn. Now I have to eat it.

The following day I had myself another slice (or was it two?) and had a few bites cold and then the remainder went into the microwave for about ten seconds just to warm it ever so slightly. Personally - I think it tastes better the following day and the next.

I have about a third of the pie left so I thought I would toss it into the freezer and see what happens. Wouldn't it be fabulous if this could be made ahead and frozen! You can buy completed pies and cakes in the freezer section of the grocery store, so why would it not work at home?

(Edit: I forgot to mention that after baking for the alloted time the tart was not browning, so I placed it under the broiler till the edges of the apples were nicely colored.)

Note: My apologies for the poor quality of some of the photos. By the time the tart was baked it was getting dark. Some shots where taken in the kitchen and others in the back room; hence the color differences. 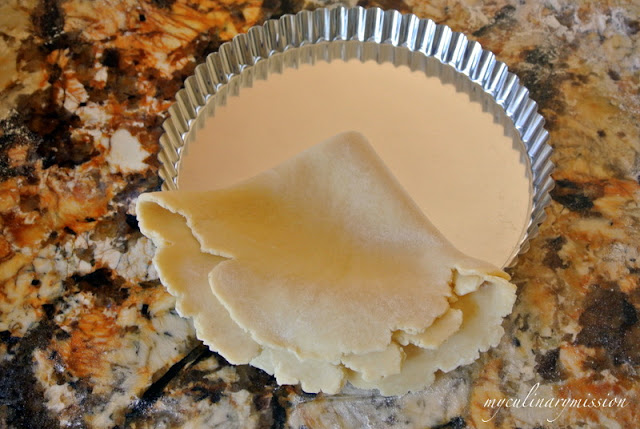 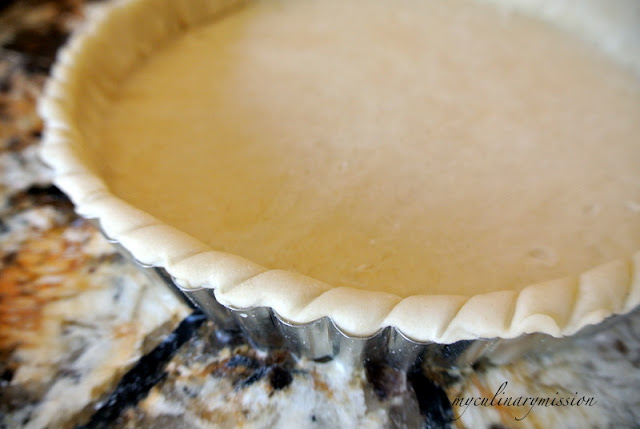 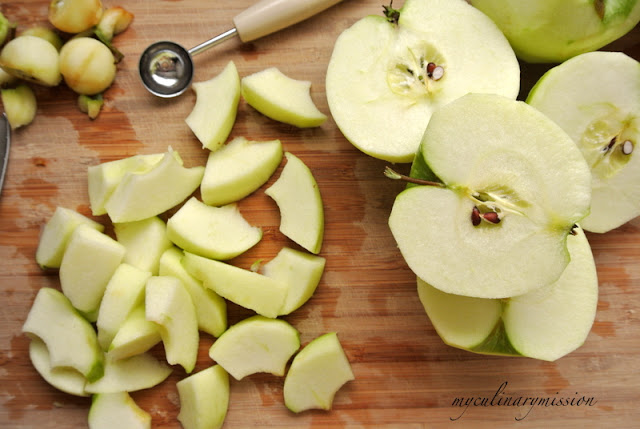 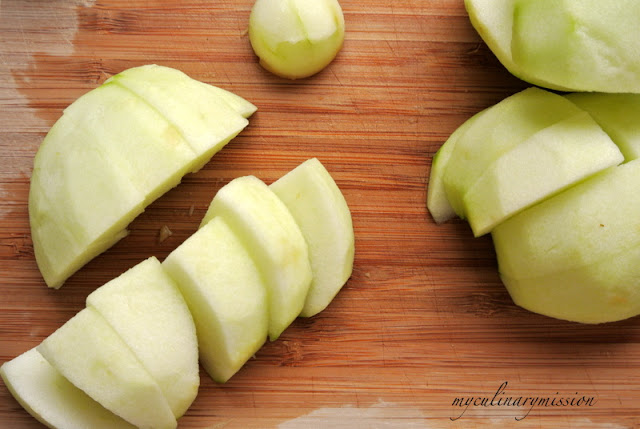 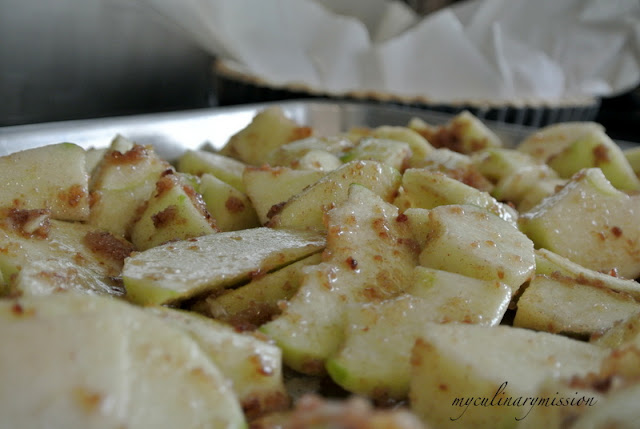 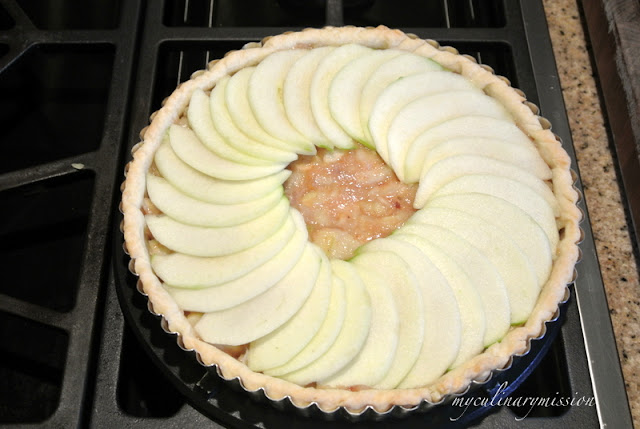 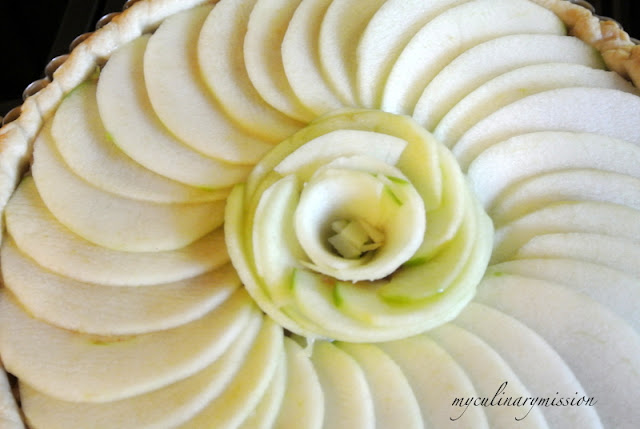 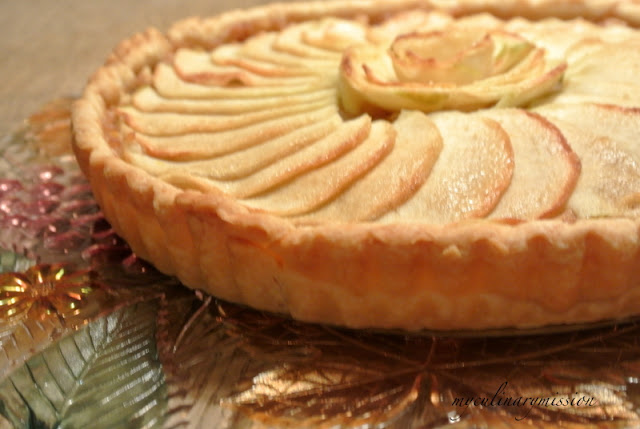 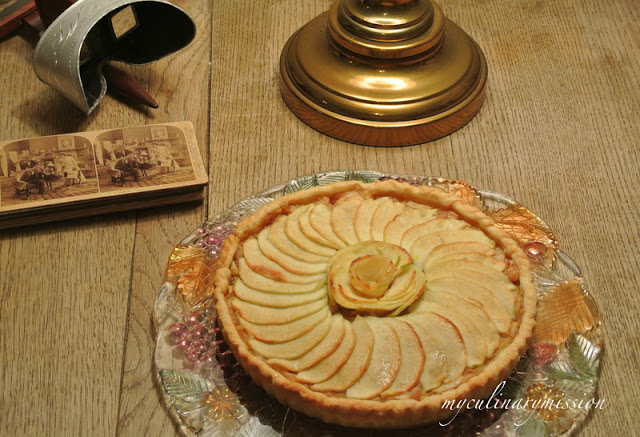 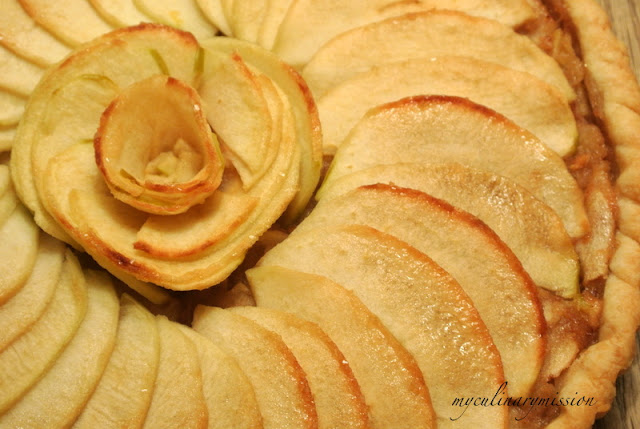 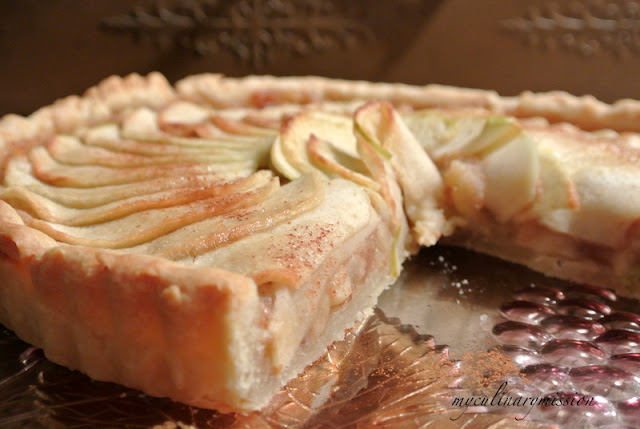 Do make sure and check out my fellow baker's take on this recipe. There are always interesting variations from ingredients to finishing techniques.
Posted by Cathleen | My Culinary Mission at 12:00 AM 32 comments


This is the book our daughter requested when she moved out rather than my standard gift of The New Basics Cookbook.  She is into the whole organic food, health and fitness scene ~ not sure where she got this from, not us! So glad she is though, and at an early age ~ if only I was so lucky!

Myrna has some really tasty recipes in this book. Two of my favorites are her granola recipe that I have yet to share with you (I will soon though), and her California Waldorf Salad  (no, not what you are thinking.. there are no marshmallows or heavy mayonnaise covered fruit).

I'm not completely against adding sausage to soup (something I do when my sister comes to dinner ~ she is a carnivore to say the least); I just was not feeling it ~ we had meat a few days in a row and I was craving something meatless.

This was a quick, easy and comforting recipe ~ perfect for the chilly weather we have been having (by California standards; 40° - 50° at dinner time), and it's healthy to boot! 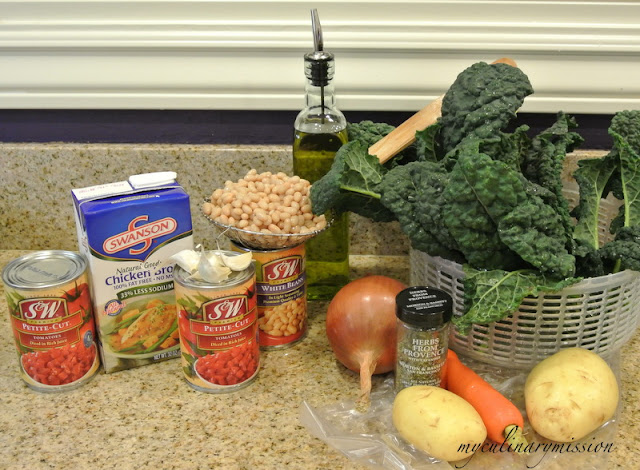 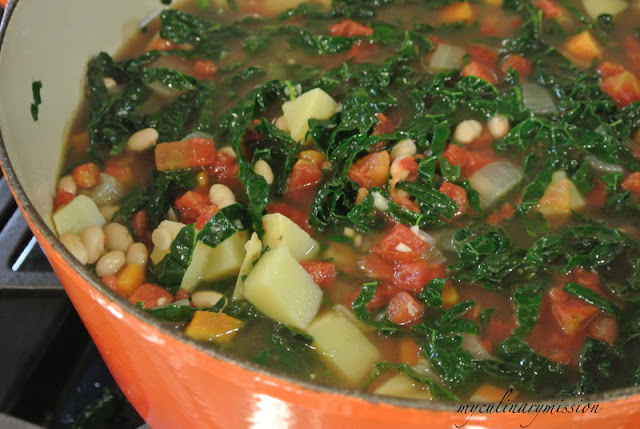 Continue for recipe...
Posted by Cathleen | My Culinary Mission at 8:34 PM 4 comments