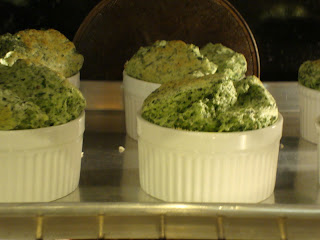 Ahhh...the soufflé. I recall the cartoons of my childhood where the slightest sounds would collapse these delicate dishes. They may not collapse at sounds while baking, but boy do they deflate immediately after being taking from the oven! Or it could just be mine that deflated so quickly....

I have always wanted to make a soufflé. Though I have always thought it would be a chocolate (of course) one! This one sounded yummy so I figured, why not?

I have never ordered a soufflé before, let alone make one; so I have nothing to compare it to. I'm not sure I cooked it long enough, though I did cook it for the time allotted and what I thought was well-browned on top. Like a cheesecake, it said when lightly tapped, the center should be firm. (my cheesecakes have never been firm before cooling, nor this soufflé) As I said at the top of my post, it deflated almost immediately after being taken from the oven. The flavor was good, the texture was very airy, but wet/raw tasting; not sure if I really liked that. If this is how a soufflé is supposed to be, I probably won't be making another one anytime soon. What are your experiences with soufflés? 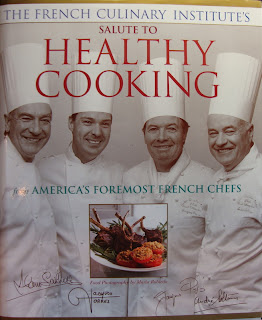 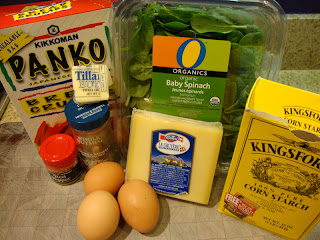 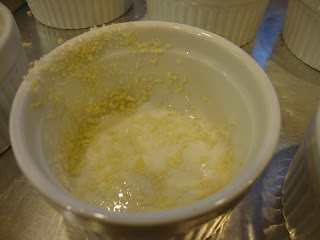 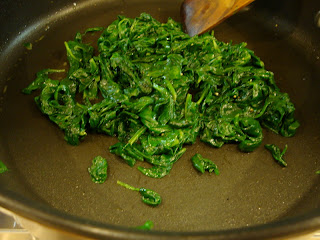 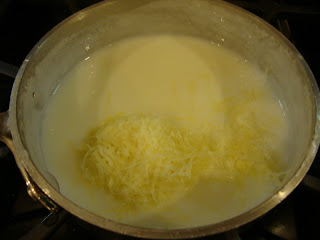 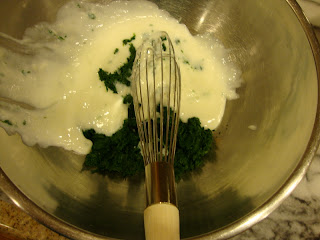 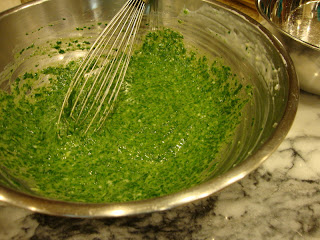 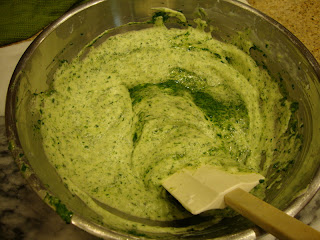 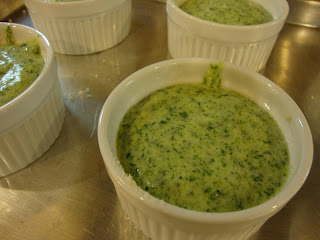 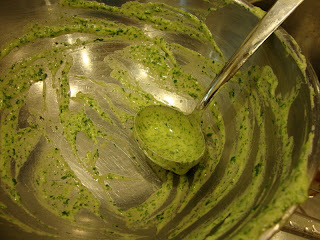 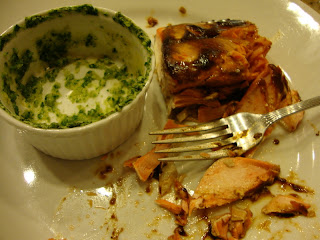 ﻿
Spinach Soufflés
8 servings
½ cup freshly made dry bread crumbs
½ tsp. butter, melted
5 oz. fresh spinach, washed and stems removed
Salt and freshly ground black pepper
1 ½ Tbl. cornstarch
1 1/3 cup 1% low-fat milk
¼ cup shredded Gruyére cheese
Pinch of freshly grated nutmeg
3 large egg whites
Pinch of cayenne pepper
Coat eight (4oz) ramekins with nonstick spray. Sprinkle the bread crumbs into each and coat, shaking out any excess. Place the ramekins on a baking sheet.
Brush a medium nonstick sauté pan with the butter. Shake excess water from the spinach and add to the pan. Season with the salt and black pepper. Cover and cook over medium heat for 2 minutes, or until the spinach has wilted. Remove from the heat and drain through a fine strainer, pressing on the spinach to extract excess liquid.
Transfer the spinach to a blender or a food processor fitted with the metal blade. Process until well-pureed. Transfer to a large bowl.
Preheat oven to 400°.
Place the cornstarch in a small saucepan. Gradually whisk in the milk until smooth. Bring to a boil over medium heat, whisking frequently. Reduce the heat to medium-low and, whisking frequently, cook for 3 minutes, or until very thick. Whisk in the Gruyére. Add to the bowl with the spinach and mix well. Season with the salt and nutmeg. (I added the cayenne here – it was omitted from the recipe)
Place the egg whites in a medium bowl. Beat with an electric mixer on medium speed until firm peaks form. Beat in one-quarter of the spinach mixture. When well-blended, use a rubber spatula to carefully fold in the remaining spinach mixture.
Pour equal portions of the mixture into the prepared ramekins to fill approximately three-quarters full.
Reduce the oven heat to 375°. Bake for 20 minutes, or until the center is firm when a ramekin is lightly tapped and the top is well-browned.
Per Serving
74 calories
2 G total fat
1 G saturated fat
6 MG cholesterol
Posted by Cathleen | My Culinary Mission at 3:19 PM