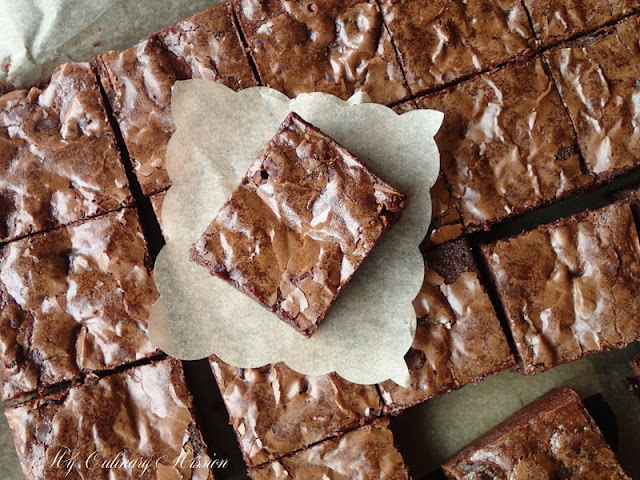 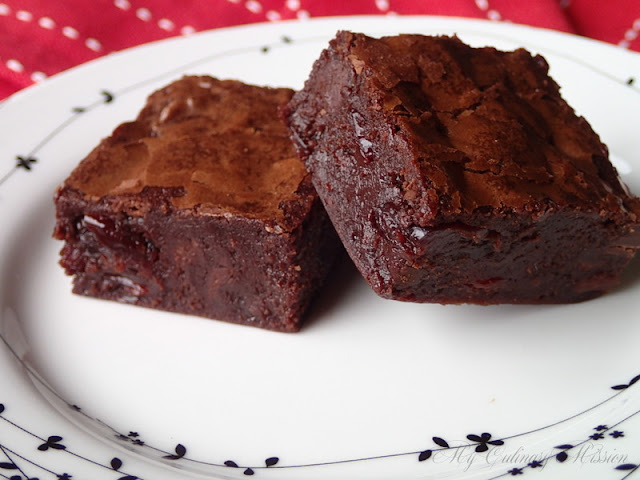 This is a pretty basic brownie recipe, aside from the addition of a little black pepper, extra chopped chocolate to stir in at the end, and dried cherries that have been reconstituted in simmering water and port (or another sweet wine), which I did not have either of, so I used a dark crème de cassis.

There was a lot of chatter about the recipe taking far longer to cook than the twenty-seven to twenty-nine minutes in a 325°F oven as instructed - so I set my oven at 350°F and they were done in twenty-five minutes, and were perfect.

These brownies turned out deliciously gooey, full of chocolate flavor, with a slight tartness from the cherries. They also were pretty sweet. I'm thinking next time I'll cut back on some of the sugar.

These were really, really good. I made sure hubby took them to work the next day so I wouldn't pig out on them - which I definitely would have.

Well, I went into work two days later, and there were still some left over?!! How can that be? So of course I had to try another one (or two, maybe three... um yeah..) to see how they fared two days later. They were not as gooey, a bit more dense, fudge like - so very good still! I don't think the guys cared for the cherries... oh well, their loss, my gain - literally, unfortunately.

We have been asked not to post the recipes here on our blogs. You can find the recipe on page 322 of Baking Chez Moi.

You can check out my fellow baker's results, by clicking here for a list of their links.


Posted by Cathleen | My Culinary Mission at 2:35 PM