The CCC cooking through River Cottage Veg
by Hugh Fearnley-Whittingstall

My choices for June are: 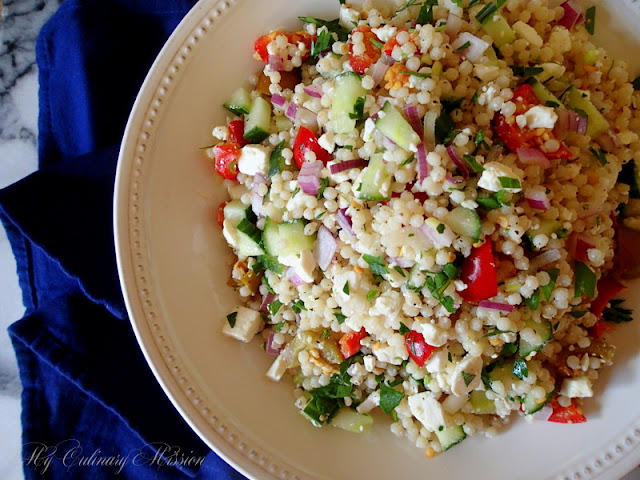 Oops! I made the wrong recipe - as I was at the store, I realized I had not written down the ingredients on my shopping list - I ran home, threw the other groceries in the garage, grabbed the book, and went back. Unfortunately, (or fortunately for me) I read the ingredients for the main recipe; this salad was already in the line-up back in August of last year. This month's recipe was a variation on that one, using fresh tomatoes and olives.

The salad I made, uses jarred roasted red peppers (I used sweet cherry peppers - so good), cucumber, red onion, feta cheese, parsley, and of course, couscous. I added some spring onion from my CSA box, in addition to the red onion; and to the leftovers a couple days later, I stirred in some fresh corn kernels from the leftover corn on the cob we had the night before - it was really tasty with the added corn. 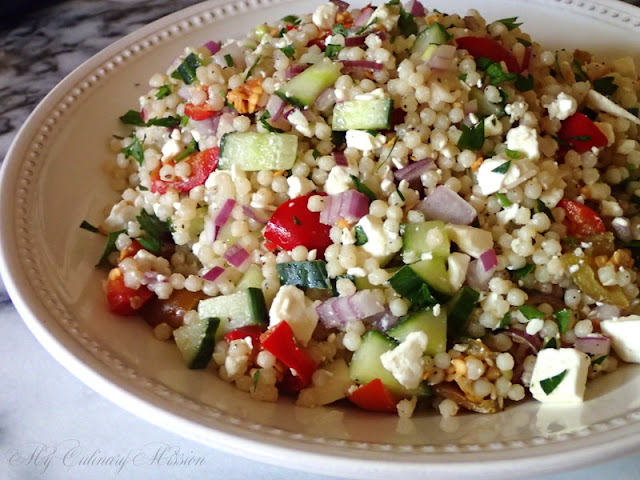 The salad has a very light dressing made up of just olive oil and lemon juice, which is tossed with the warm couscous - I'm thinking this is Hugh's favorite.. he uses it often. However, I felt it could have used a little more dressing.

I may have made the incorrect recipe, but this was darn tasty - so light and refreshing; and it tastes just as good days later. This would make for great lunchbox fare (Ash!). 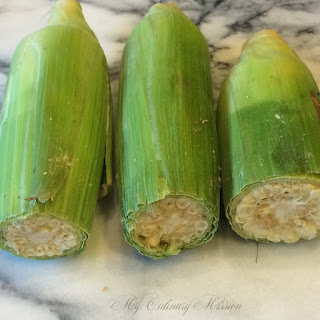 Speaking of corn....  I received in my CSA box, corn on the cob, that the tops were lopped off! A third to half of the cob! Am I wrong to be disturbed by this? The company I received my box from, commented (on their FB page) that they cut just the tops off (ah, more than just the tops!) because they were unsightly looking. "Unsightly looking" to me, construes that maybe the corn isn't as fresh as I thought. It did still taste good, and that is what counts, but I felt this was just plain wrong.  Sorry to digress - had to vent a little. (Update: Received a phone call from my CSA - the reason for the tops being cut off, is due to WORM problems. The corn had worm holes... yeah, that would be unsightly.) 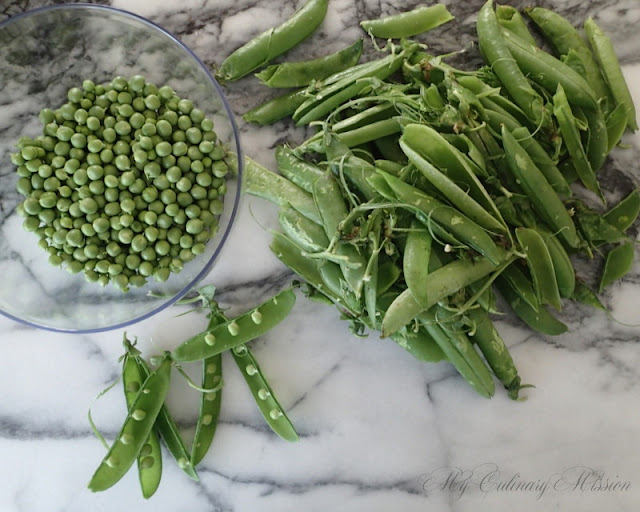 Time was not on my side this month. I only completed two of the five recipes I committed to making. I almost did not get this one made - for I knew I would not be going to the farmer's market, and really did not want to make this recipe with frozen peas. 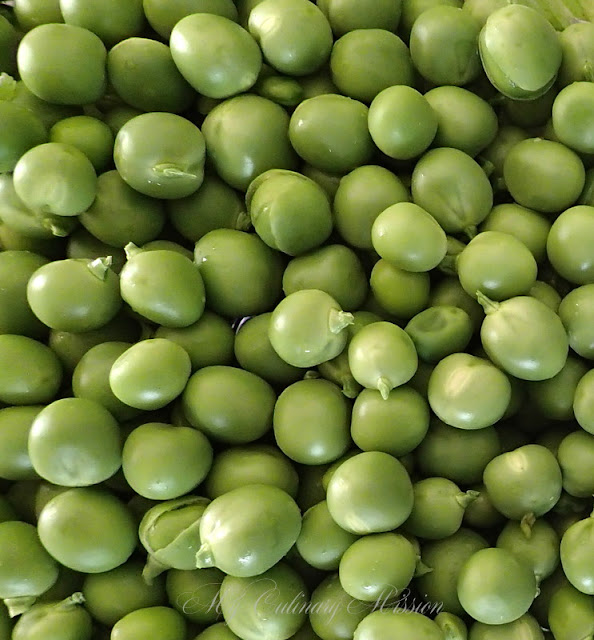 I got lucky - there was a whole bin of fresh peas at my grocery store. So I grabbed a bunch with hopes I would be able to get around to making the recipe - and I did! 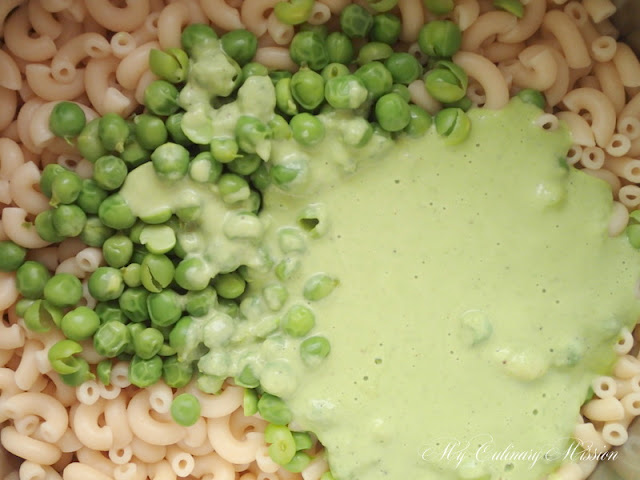 This was a simple recipe, though it does require quite a few dishes to prepare - three pots and a blender. In the old days, it never, ever, crossed my mind as to how many dishes a recipe would use - and I used to prepare meals that would take a good four hours or so to complete! I guess I'm getting lazy in my increasing years... 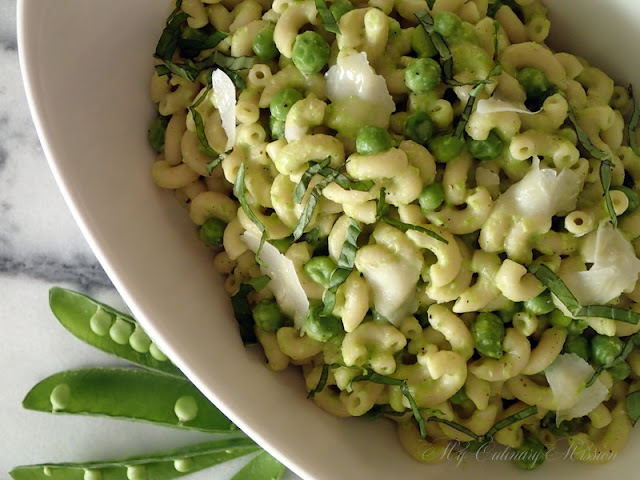 The sauce for this dish is made up of fresh peas, garlic infused butter, and cheese; all is whirled together and then tossed with the noodles, along with additional (cooked) fresh peas, salt, and pepper. Just before serving it is topped with grated cheese and shreds of basil. The more cheese you use, the tastier the dish will be.

I found this to be pretty bland, even though I used three garlic cloves, to Hugh's one. I thought the sauce tasted pretty good on its own, and was looking forward to dinner, but the flavor was lost once it was tossed with the noodles. The bites with the most cheese tasted best, but I was trying to keep this on the healthy side, so I refrained from adding more.


To see what recipes the other members chose for this month, head over to the the CCC website and look for the May LYL post for a list of their links - or click here to be directed automatically.

We have been asked not to publish the recipes here on our blogs. We encourage you to go out and purchase the book and join us on this fun and healthy adventure! 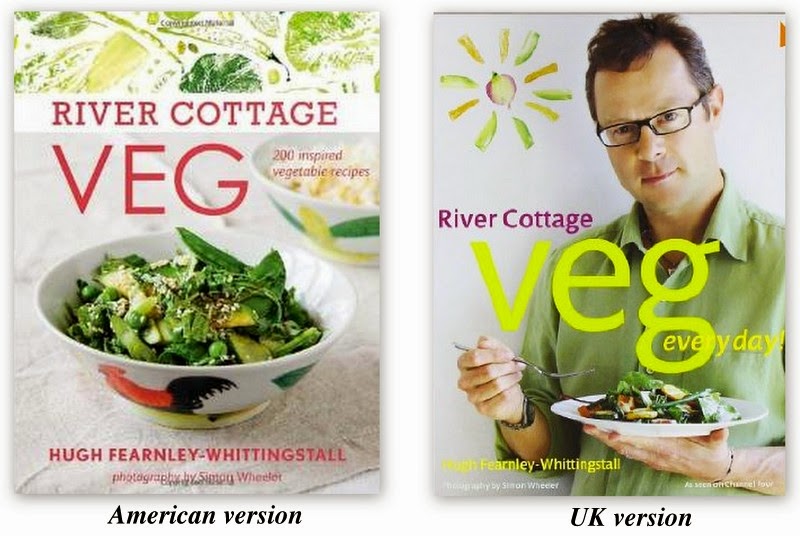 Posted by Cathleen | My Culinary Mission at 7:11 PM