Book 106: Eat Your Vegetables: Bold Recipes for the Single Cook 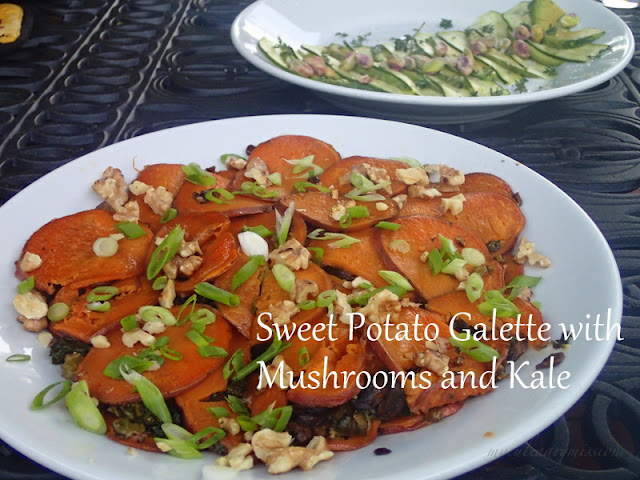 A picture of this book popped up in my news feed on FB, and I knew I had to have it - I'm a sucker for a beautiful cover; I loved the rustic look of the cover photo of grilled asparagus. I popped over to Amazon to leaf through it and the first photo I saw was this galette. I wanted to make it right then and there.

I rushed down to my local bookstore to purchase a copy. As soon as I got home I plopped myself down on the sofa to read through it. Not only am I liking the recipes I'm reading, but I love his essays he has scattered throughout the book of his adventures of family farming, forgetting the clock (cook by smell/sight), a peek behind the scenes of that beautiful stand you swoon over at the farmer's market and more.

I enjoyed this book so much, I went back the very next day and purchased another copy for our daughter and dropped in the mail the same day. She thanked me, and informed me that she follows him on twitter. Mom scores!

This recipe would make a great addition to your Thanksgiving menu, as well as this book to your cookbook collection. 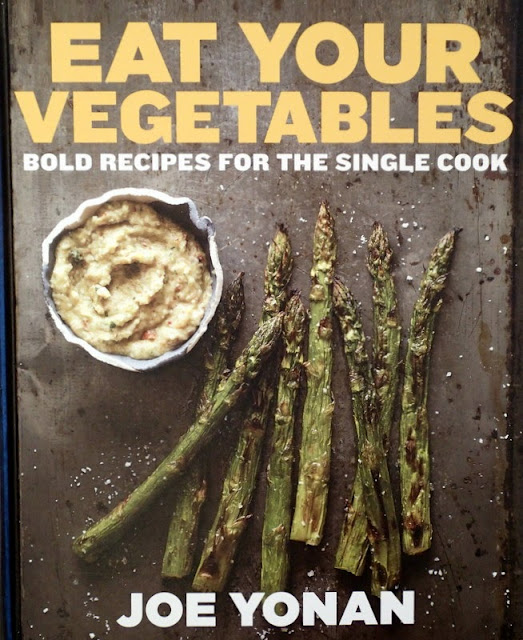 Amazon
You don't have to be single to enjoy this book! 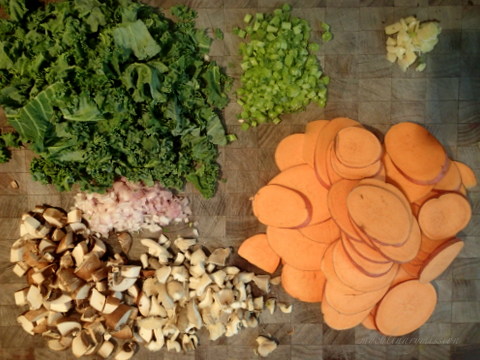 This is the first recipe I have made (or come across) that uses the kale stems as well. 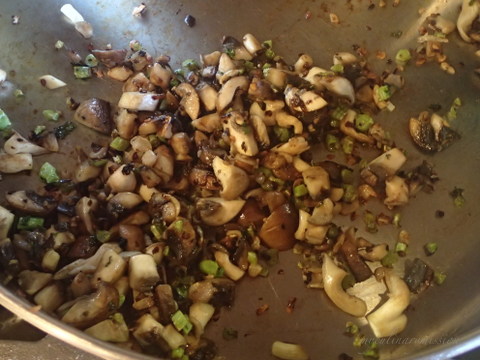 If the filling looks a little sparse, that is because I doubled everything but the mushrooms (I had, what I had..), and I forgot to add the kale. If I had made this with the correct amount of mushrooms, this could have been even better, and it was darn good as it was. 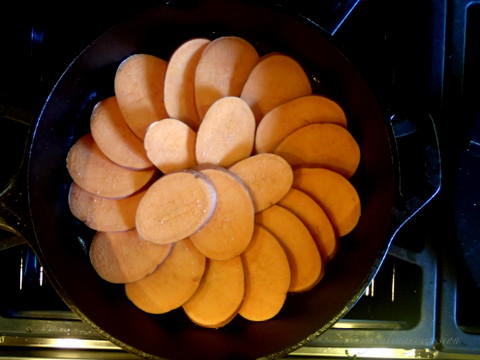 First layer of sweet potatoes (I used a yam). I should have started from the center and worked my way out, being the bottom will become the top when flipped. Yes, after cooking, the galette is flipped out onto a plate. You could serve it straight from the pan, but where is the fun in that? 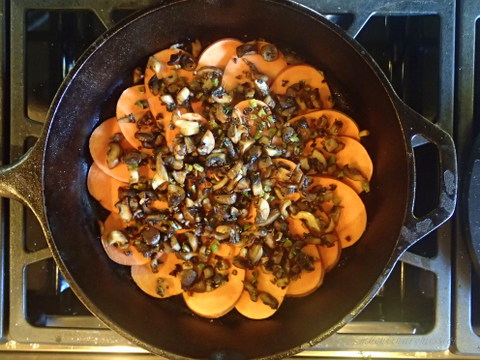 Looks pretty, even without the kale. 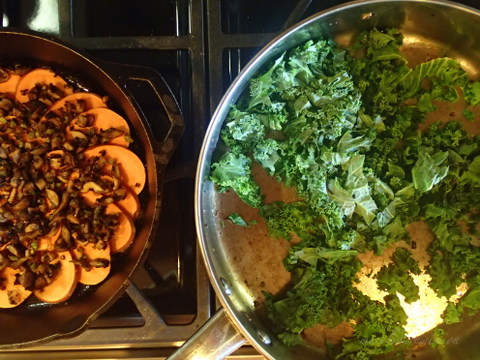 Once realizing I forgot the kale, I gave it a quick sautée in a little oil until wilted, and all was well. 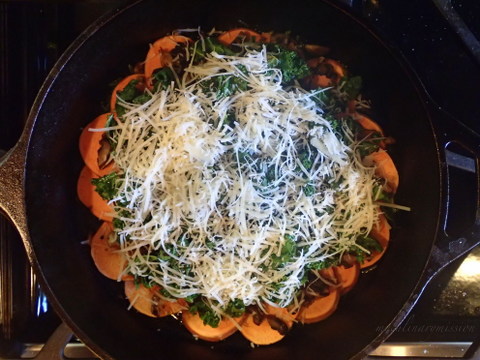 Looks so beautiful I did not want to cover it up! 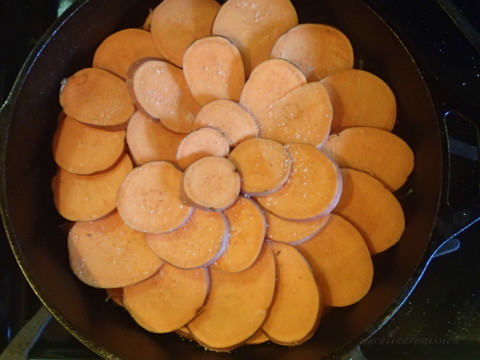 Cover the filling with the remaining slices of potato. After baking in the oven, you are instructed to brown the potatoes under the broiler to brown. I did, but next time I will skip that step. No need since the galette will be flipped onto a plate. 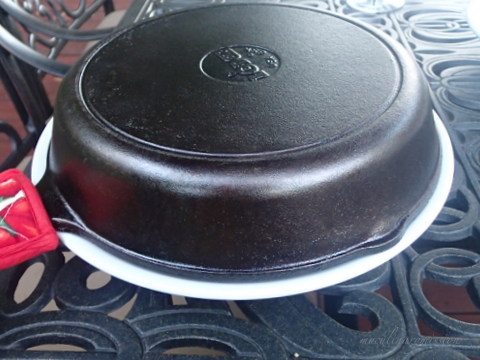 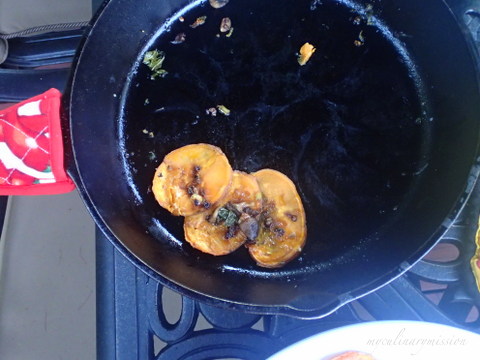 Whew! Only three pieces stuck to the pan. :) 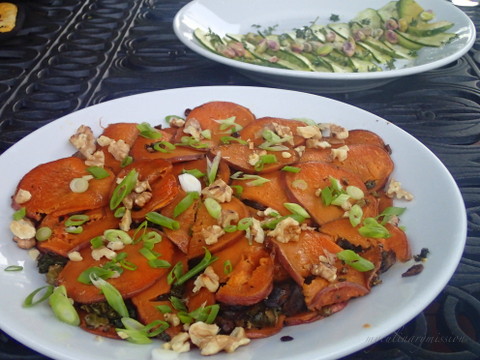 Once the galette is flipped onto a plate, it is sprinkled with some green onion and toasted walnuts.

Meals like this make me think.. going vegetarian wouldn't be so difficult; but the hubby makes a mean grilled chicken, among other things.

I had this for lunch two days later - it was just as good, if not better.

Pour 1 tablespoon of the oil into a medium skillet over medium heat. When it starts to shimmer, sprinkle in the paprika and let it sizzle and bloom for a few seconds, then add the onion, garlic, and sliced kale stems and sauté until tender. Add the mushrooms and sauté until they collapse and release their liquid, then add the kale leaves and continue cooking until the liquid has evaporated. Season with salt to taste and remove from the heat.

Pour the remaining tablespoon of oil into a small, well-seasoned cast-iron skillet over medium heat. Carefully arrange half of the sweet potato slices in the skillet in concentric circles, overlapping to form a couple of layers; sprinkle each layer with a little salt as you go. Spoon on the mushroom-kale mixture, and top with the grated cheese.

Arrange the remaining sweet potato slices on top, sprinkling each layer lightly with salt as you go. Press the galette with a spatula, cover the skillet tightly with aluminum foil, and bake until the sweet potatoes are easily pierced with a fork, 20 to 25 minutes.

While the galette is baking, sprinkle the pecans into a small skillet over medium-high heat. Cook, shaking the pan frequently, until the nuts start to brown and become fragrant, a few minutes. Immediately transfer them to a plate to cool; if you leave them to cool in the pan, they can burn. Once they are cool, chop them.

Remove the galette from the oven and take off the foil. Turn the oven to broil and slide the skillet under the broiler element or flame until the sweet potatoes just brown on top. (A personal note: I would skip this step.)

Let the galette cool for a few minutes, then run a knife around the edges of the skillet to loosen it. Invert a plate over the skillet and, using oven mitts, hold the skillet and plate together and quickly flip the two so the plate is on the bottom and set it on the counter. Lift off the skillet. Some of the potato slices may stick to the pan; use a spatula to scrape them out and patch up the galette.

Sprinkle with the green onion slices and nuts and eat. (If you prefer, you can leave the galette in the pan and cut wedges out of it for eating.)


Posted by Cathleen | My Culinary Mission at 1:55 PM