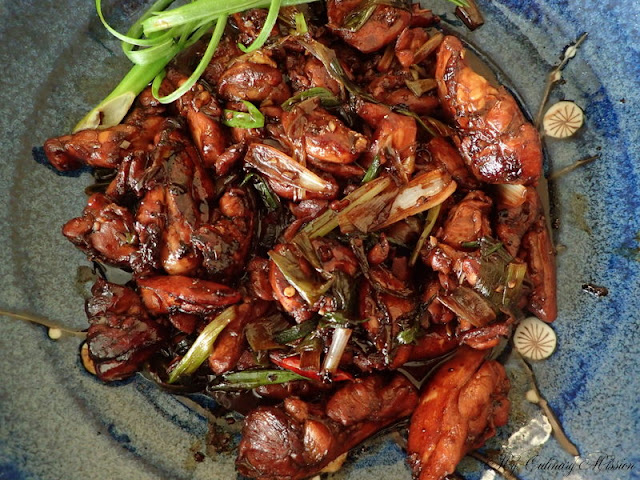 I feel the saying "you had me at . . ." is way overused and I have avoided it (I think) - until now. The title alone had me wanting to make this immediately!! And why there isn't a photo in the book is beyond me - it is a most gorgeous looking stir-fry. 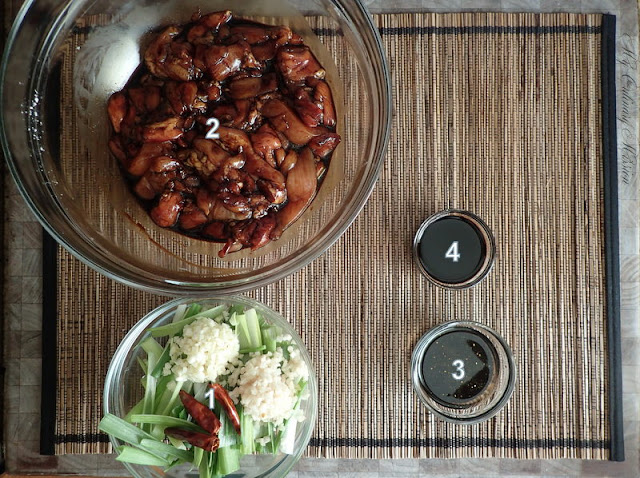 This dish is traditionally made with red chili peppers that I have used here, however in the book, red pepper flakes are called for to make things easier. I only used three peppers for this recipe, I easily could have added more for there was not much heat - not sure how old my dried peppers were. When using whole peppers, make sure to snip one of the ends off so that the seeds of the pepper disperse throughout the stir-fry.

Grace calls for Chinkiang vinegar, which she says adds a great depth of flavor, but balsamic (which I used) she says is a great alternative. 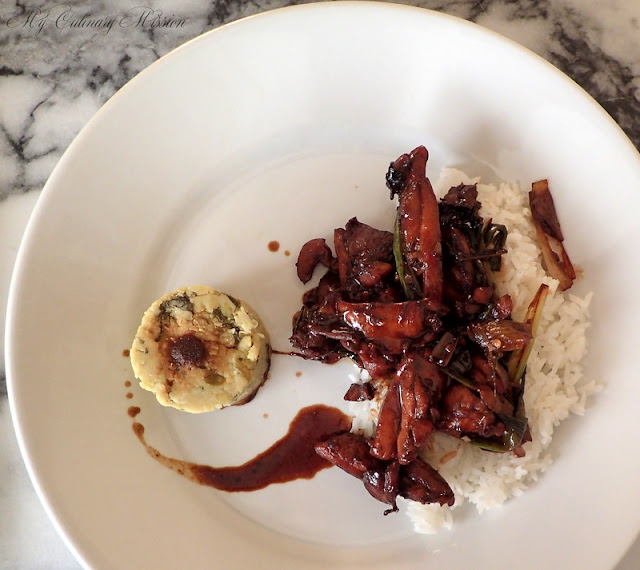 The accidental plating. Lucky for me the sauce splattered this way! (Well, there was a blob on the other side as well, which I wiped clean.) I couldn't have made it happen this way if I tried.

Not only does this look good, but it tastes good too. To me, it even had an inkling of barbecued flavor to it at first bite. Another member of our group mentioned her hubby thought it tasted slightly like bacon! 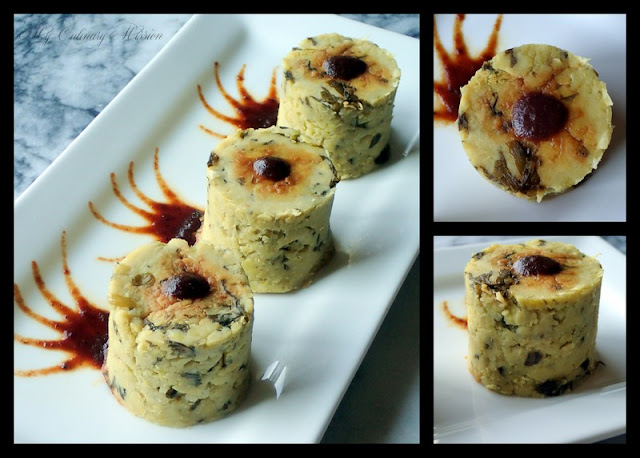 I was feeling this needed a little flair - in the end it probably didn't really need anything at all. But my idea of adding a little Pickapeppa sauce sounded like a good idea at the time. As you can see, the sauce started to "bleed" into the beans almost immediately. Hmmm, maybe two or three slices of cherry tomato on top would be cute - or nothing - depending on how you serve it up - molded and chilled, or warm, straight from the wok. 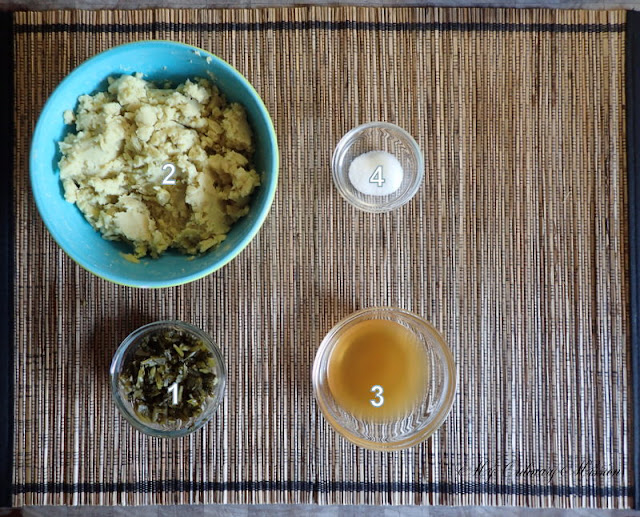 This is an odd stir-fry to say the least. It wasn't easy stir-frying mashed beans - they just wanted to stay in one big clumpy mass and stick to my chuan (wok spatula). I just had to keep scraping the beans off and pressing down and dragging the chuan across them to incorporate everything. 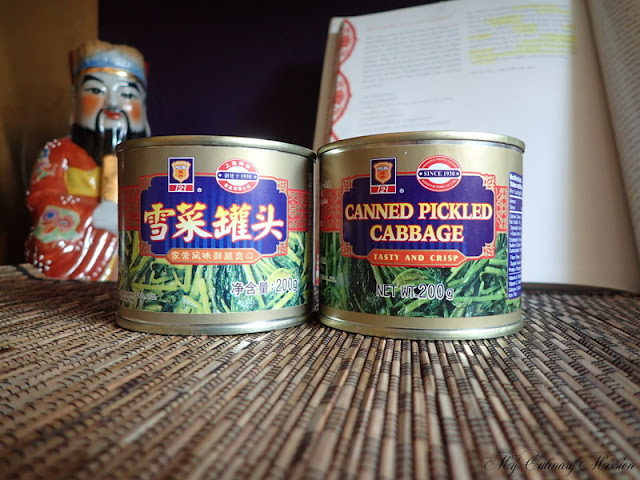 I found the pickled cabbage at a store in Oakland's Chinatown (wish I can remember which one - it was the last store I was going to look at before giving up). Of course I tried to find them at my local stores, even 99 Ranch, our local Asian grocer to no avail - the other stores may have had this - but if they had the Chinese label showing, I would have had no clue. At least now I know what to look for. 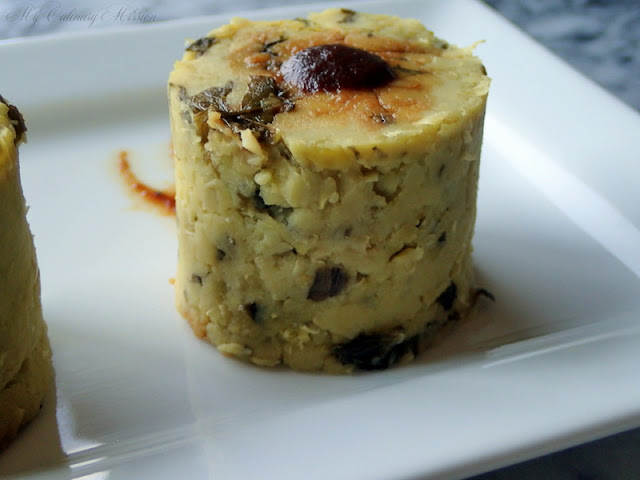 The recipe calls for fresh fava beans - which here in California do not come into season until late January (if you're lucky) or February according to the vendor at the farmer's market. I may have been able to find frozen fava beans at 99 Ranch, but I never made it over there.

We actually enjoyed this. Andy liked it a lot actually - he said it made him feel like he was eating clean; "clean" eating can be a put-off for some - but this was tasty - not knock-your-socks off tasty like I'm accustomed to with recipes from this book, but it was good. Andy says he would even eat this a couple times a week.

I'm glad I purchased two cans of the pickled cabbage, for I will definitely make this again when fresh fava beans are in season come next year. 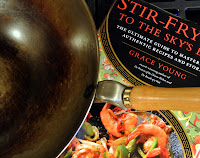 We as a group have agreed not to post the recipes on our blogs.
Posted by Cathleen | My Culinary Mission at 9:27 AM